Well I'll get straight to the meat and potatoes of my point, unlike Legendary's 2014 Godzilla, which drags it's feet like a dog knowingly being taken the vets. This was a massive let down. 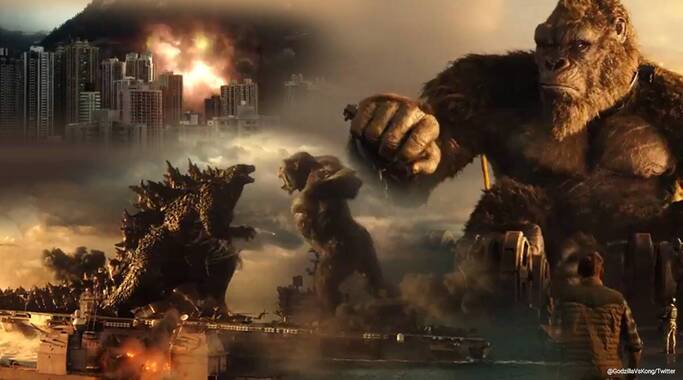 And it's really simple, easy and straightforward why I disliked this. Because this film was NONE of those things. Godzilla movies aren't meant to have nuance, nor be smart. They're meant to be as aggressive and unrelenting as he is. Now don't get me wrong, KONG is a far more complex creature but he has his own movies to explore that further, this seemed to want to be both a sequel to KONG: SKULL ISLAND and a big dumb disaster film, which isn't possible! The stories that are happening in this film are all slightly ridiculous, and all require you to leave your common sense at the cinema entrance. That would be fine, but when you have all of them happening at once it just becomes a giant 2 hour blur of your brain asking you:

I'm not going to talk about plot points or spoilers, what I can say is absolutely none of the storylines happening in this film (and there's a few) make ANY sense, down to their most basic plot points. Films like this don't need complexity nor intellect behind their logic, I know this, but they also shouldn't try and disguise a stupid plot point behind some veil of well educated words and actions. Throughout, characters make decisions that move the plot along like an early 1970's Doctor Who episode. Badly. I just sat dumbfounded at the dialogue actors, 'good actors', are saying. The first Godzilla film, in 2014, tried too hard making it about the humans, and failed. The second film was a huge improvement. The monsters rise, the humans scatter. Simple. Perfect.

In Godzilla vs Kong, between the awesome fight scenes (I'll get to that), the human side of the movie is the most shit of any of Legendary's attempts at this. I'm not an idiot, I'm not watching this film for the people, but I don't want to watch them on some goddamn Scooby-Doo chase that leads nowhere. Because that's what happens with ALL the stories in this film. They lead nowhere. The film spends any moment with the humans of this film showing them exploring and finding out about this 'world', and what they allude to is fascinating stuff...but there isn't room for beauty and fantastical scenes in a monster battle film. The 2 tones collide like the behemoths in this film. And because of that you're left feeling empty and frustrated. Just like your teenage son, I honestly think all time spent with humans, in this film, is a complete waste of time. Jurassic Park is very good at doing this. The humans are always getting from A to B. That's it. In this there's missions, sidequests, and everyone is fucking useless apart from a sweet little deaf girl who steals the show off everyone around her. Well, almost everyone...there are 2 headliners in this film who do a great job whenever they're onscreen.
There was a far simpler story to be told here that would have pleased me no end, and what amazes me is that some critics are saying that the story IS simple. That the creative team 'did' capture the childlike energy of the originals. And to that, I point them at their own reviews of 2019's Godzilla: King of the Monsters. A film they heartily praised for its visual effects, action sequences, cinematography, and musical score but criticised the plot, pacing, tone and characters. How can you not see that in this!? Press pause at ANY moment in this film and there is dialogue, or a plot point, that could be ripped apart. If a film is a bit silly, it gets away with it. This has decided to take itself somewhat seriously. Like Patrick Bateman...but if he ran a Domino's. I see how you see yourself, but you should see what I'm seeing.

I'll watch the fights from this on YouTube in the future, but never the whole film. If I fancied watching a feature length modern telling of Godzilla, I'll be reaching for these bad boys: