27th/ American Werewolf in London
I actually only finally watched this classic horror this year! And boy had I been missing out! A cult film with good reason; fantastic camp horror humour, cool visuals (I loved the first werewolf transformation), a great cast with some amazing characters and a lovable main lead from David Naughton. I loved the slaughtered lamb and its interesting locals and I guess the films humour reminded me of 'Evil Dead'. Probably why I loved it so much.
As we draw to Halloween I have come to the realisation I have missed out a fair few of my favourite movies, and as this is my blog, I'll just double up on a few. And what could be better than watching one horror film a day? Two horror films a day!

​28th/ Psycho
1960's classic Alfred Hitchcock movie, 'Psycho'. The granddaddy of slasher movies and one of the main influences for most of the classic horror killers we have today. Marion Crane has stolen 40k from her boss so she can run away with her boyfriend Sam Loomis, they get caught in a storm and have to stop off at Bates Motel. Greeted by the strangely fantastic Norman Bates who infamously has some mother issues. Everyone has seen bits of this movie as it’s got such a cult following but if you have not watched this and love your horror movies I couldn’t recommend this classic enough.

The Exorcist
Another essential horror film! 1973's 'The Exorcist', was one of the first horror movies I ever watched and terrified me from a young age. Setting the bar for possession movies, I loved Regan and the abuse that she gives anyone trying to rid her of the demon. What's scary is that this is said to be based around true events! Again, a must see and recommendation to any horror fans. 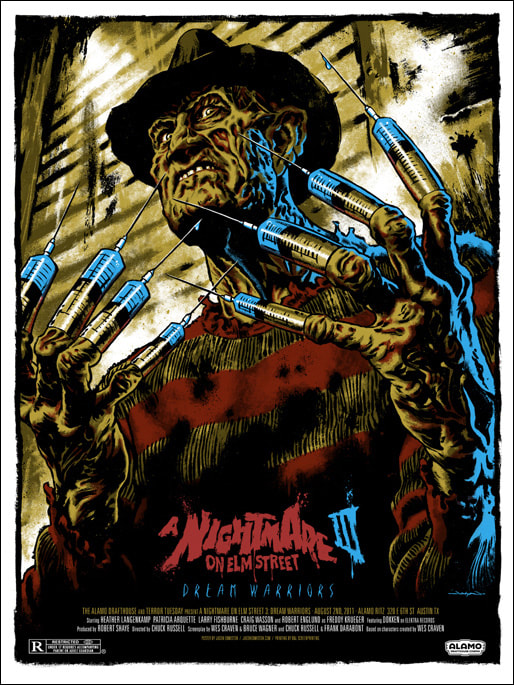 29th/ A Nightmare on Elm Street 3 - Dream Warriors (Freddy movies)
So we have had all the modern Icons of horror. Chucky, Leatherface, Ghostface, Jason and Jigsaw, we are only missing one.. and up on the 29th, the stripy jumper wearing, razor claw loving, smart witted Freddy Krueger!. Freddy stars in 5 nightmare on elm street movies. He also stars in 'Freddy's Dead - The Final Nightmare', Wes Craven's 'The New nightmare', a remake in 2010 and he even got to match off against Jason in 2003's 'Freddy vs Jason'. I have picked my favourite of the 'Nightmare on Elm Street', the third installment; 'Dream Warriors'. This just edged it for me over the original due to its cool as fuck deaths (e.g. the TV death), and for me this is the stand out for Freddy. He gains more wit and comedy about him and just becomes a much better and more interesting mass murderer! 1 2 Freddy’s coming for you!!!!
Picking one recommendation for Halloween itself was tough for me, it was between three movies. The two I’m about to talk about now just missed out on the top spot but deserve massive kudos as some of the best horror movies out there:
29th/Alien
Another long lasting horror series that spawned many films, the Xenomorph is a terrifying killer that destroys anything without remorse. There are all sorts of cool aliens in these films such as the face hugger (they freak the hell out of me), Queen Aliens and even at some point a human-alien hybrid but the main Xenomorph always seemed the most deadly and dangerous to me. My actual favourite of the series starring Aliens would be the 2nd film: 'Aliens' but I would class it as more of an action movie than a horror, so for the purpose of this blog I'm picking the original 'Alien' as it's creepy, suspense building vibe, to me, feels more like a horror film than any of the others.
The Shining
Hereeeeeeee's Johnny! If you have never watched this masterpiece of cinema then you need to...not only one of the best horrors of all time but one of the best movies of all time. Jack Nicholson is amazing and gives some of the best acting you will ever see in a movie, he pulls of the 'going-crazy' thing perfectly. Amazing setting and cool hotel, with great effects and storytelling including the best build up to a great pay off that I cannot really go into without spoiling the film. This was a no brainer for the Talk Nerdy recommendations and an absolute classic...a must watch for anyone. Horror fan or not! Get watching.