Not at all. Strap in and prepare for spoilers. Whilst I am pleased that doesn't mean I can't try and tear this film a new one.

Let's start with the things that REALLY get under my skin. No, not the way DC spelled APOKOLIPS (it well should have been APOKOLYPSE. That could be a contestant's name on Ru Paul's Drag Race) but the terrible style of animation used in this and throughout their projects. It's no secret I am fussy when it comes to the manner of animators and artists. I like and hate specific things. One thing I HATE about DC's animation studio throughout this film, and the rest, is the sheer lack of distinction in people's faces. All the men have the same face. Name a visual, distinguishable charactistic of one of the hero's faces. Don't talk clothes or hair. Faces. If you think I'm being fussy what's the difference between Shaggy and Fred's faces in Scooby Doo? Fred has a pronounced chin, high cheek bones and a small nose. Shaggy has a long face with goatee, bags around his eyes and a larger long nose. See? And these were originally drawn and animated back in 1969 for kids TV. Why on earth is the only difference between Clark Kent and Constantine's face, 5 o'clock shadow? Is this forgiveable...well, yes.

I have to concede and slump down into my chair. Whilst I hate the designs of the faces, everything else looks amazing. The costumes, the scenes, the magic coming from Constantine's hands, the blood and fight scenes. All animated brilliantly. Because of this I can forgive the aesthetic chosen, as the good indeed outweighs the bad. 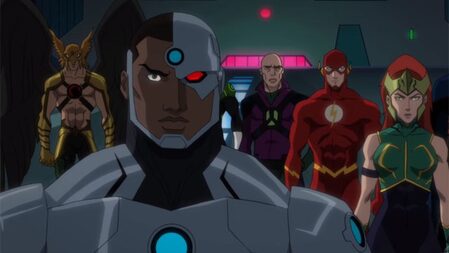 Let's get into the real nitty gritty. The plot! This film is a sequel to 'JUSTICE LEAGUE DARK' from 2017 and is the culmination of 15 films. It's being labelled DC's version of 'ENDGAME'. Is it deserving of that title?

Weirdly, I don't feel that these films ACTUALLY link up that well, with the exception of 'DEATH OF SUPERMAN' and 'REIGN OF THE SUPERMEN'. Their linearity isn't as strong as Marvel's MCU and I feel leaps of presumption are taken when the creators are writing the follow up film from the last one. I mean...how on EARTH does this follow on from JUSTICE LEAGUE DARK from 2017? That ends with Constantine deciding he's going to stay with Zatanna and company. And now we're here on a space station plotting to attack Apokolips!?

In actuality this is really a sequel to 'REIGN OF THE SUPERMEN'. Yeah, I don't know why it's billed as a sequel to JLD because if you were to watch these back to back, a huge amount would make no sense. To be honest, for a story that is to be the end result of 15 films there aren't any plot holes or problems. Again, this could be majorly aided by the lack of major connectivity between the films but maybe that's why it works and why they didn't try to make stronger connections between them. Not tying themselves down and having total creative freedom. Although there is one person who definitely helps connect some of these films together, Darkseid.
Lois saying "I know" to Superman was pure Han and Leia. Sticking with Star Wars, Darkseid getting Batman to strike down his own son and "join him" was just the Emperor with Darth and Luke in 'RETURN OF THE JEDI'. There were many moments I felt were taken from other films but my head is weary from a night of watching Eurovision and what brain cells I have left are having troubles fetching those memories. Either way, any cinemaphile will definitely see moments and nods to an array of films within this picture. As well as swearing and a lot of death.

A whole bunch of your favourite heroes and villains die AAAAAND...they aren't given much dignity. I felt people were rubbed off far too easily considering this was to be their on screen death. Lady Shiva straight up gets shot in the head whilst walking through a dangerous area and that's it. It was definitely not a death that suited the character and is forgotten about pretty quickly. On another note, Paradooms are brilliant "flying monkey" baddies and the power behind them is a crazy cool idea. I feel that then this means only the best should survive, so how in the hell is Talia shot by a rogue bullet but Batgirl is there until the very end and has to be taken out by 5 of those bad boys (I like Batgirl as well, it just didn't make sense)?

Also, why does Lex attack the rebels when they arrive? He was the sleeper agent. As soon as he is completely vulnerable to attack, and has lost all his defenses, does this come up and he works with them, as was the plan. So what was the fight for? It makes zero sense, and again, is brushed over pretty quickly.

Oh, can we talk about this guy for a hot minute?
When it all comes down to it though, I really thoroughly enjoyed this story and film. As much as I've just spent some time bashing on it, it was all quite unpredictable and ended on a note that I kinda wish the MCU had done. Creatively open ended whilst also nicely rounding off an animated universe built on the Flashpoint was really very clever. All the character's arcs were really well thought out too. For example Etrigan's story was perfectly interwoven into the background and was was the right amount of funny to not ruin the tone of the film, and Raven's had a fantastic resolution to her constant struggle that brought a smile to this face.

All in all this is definitely worth a watch, be it as a DC fan, a DC animated universe fan, or just a comic fans first dive into this world. I too will be waiting on the horizon watching for whatever comes next. Just don't use or do whatever you did for 'Wonder Woman: Bloodlines' DC. Christ, that certainly needs wiping and retconning from our lives...