Here's a question for you. Do you know anyone who doesn't like Batman? Like an actual human being who knows who Batman is and still doesn't like him? No, me neither. In fact I would say you all love Batman and would love him to be your gateway into the world of comics (God knows that's how Nolan recruited a lot of cinema-goers). It's daunting to know where to begin when you have 75 years worth of material to get through. But don't see it as too much choice, see it as a beautiful, all you can eat buffet of Gotham infused goodness. So I'll jump straight to the point; is Batman Year One a good place to begin your very own journey into the Batcave? Or is it George Clooney in a cape?

I think the first thing you've got to ask yourself is what kind of Batman do you want to read about? Do you want it to be as dark and gritty as the Arkham Games or The Dark Knight? Or do you want there to be an abundance of gothicism entwined within, like Tim Burton's films? Perhaps you long for the days of campy fun Adam West? You can jump on to Batman at any of these points given the amount of reboots and stories DC have had published over the years. You can even get him with a dose of Turtle power now, you know...if that's your thing. 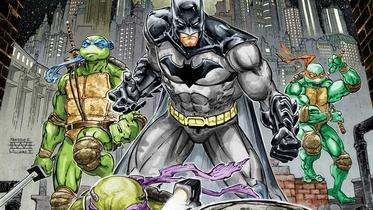 ​Batman Year One falls messily somewhere between 3 points. It reminds me a lot of the animated series from the 90's. Top that with slight tinges of the Bruce Wayne we saw in 1989 Batman and some lighthearted dialogue that makes me think Adam West was present when Frank Miller wrote this, and you have Batman Year One.

The story recounts the beginning of Bruce Wayne's career as Batman and Jim Gordon's with the Gotham City Police Department. Bruce Wayne returns home to Gotham City at the age of twenty-five from training abroad for the past 12 years, and James Gordon moves to Gotham City with his wife, Barbara, after a transfer from Chicago. Both are swiftly acquainted with the corruption and violence of Gotham City, with Gordon witnessing his partner Detective Flass assaulting a teen for fun, whilst Bruce nearly dies on his first outing. And you thought your first year of high school was scary.

The most notable thing about reading this was I felt like it was 1939 and I was reading Detective Comics #27, bear in mind this came out in 1987. The artwork by David Mazzucchelli harkens back to those classic comic styles yet you can't help see some slithers of 'Miller a lá Dark Knight Returns' in some of the panels. The use of colour, or sometimes the complete lack of it set the tone for each moment. There's the crisp yellow, white and black pages of the bat crashing through Bruce's window, that may have inspired some of the Daredevil Yellow artwork. To me it conveyed how enlightening and grand this moment is in Mr Waynes life. Further into the book there's the brightly coloured drawing of the exact same room, except it is daytime, Mr Wayne is entertaining guests and it couldn't be more of a juxtaposition to the last time we'd seen this part of Wayne Manor.

Miller's writing is top notch too. This is definitely a young Bruce Wayne. He isn't battle worn and broody yet. He's eager for battle and still riding a slight wave of optimism, that this is the beginning of a great new venture for him. Maybe that's where I pick up the 'Adam West' vibe. There's a lot of smiles and rookie mistakes by our caped crusader as he learns to forge his own path and tries to help a city that doesn't actually want helping. 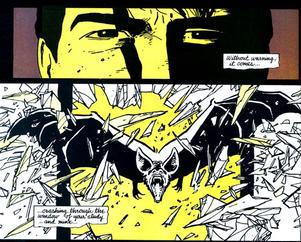 In fact the brooding character within these pages is none other than Jim Gordon, who is facing an entire police force poised to crush him the second they get their chance and the great difficulty balancing his life fighting crime and his home life...sound like anyone we know? In fact Jim takes a rather large portion up of this story as most of it is told from his point of view. Yes we see Bruce weighing up his own problems but it's Jim that the calender in this comic seems to favour centering around. Jim also has a baby on the way and seems to very much hate his job, his life and himself. This is the story that I feel the TV show 'Gotham' was trying to get across to me but where that failed to captivate me, this kept me hooked. Probably because Jim Gordon is a genuine badass in this.

What was a nice surprise for me reading this was the appearance of Catwoman. Selina Kyle is at her most feisty in this, really giving all the men in this a run for their money. Miller does an exceptional job of writing her as a lady of the night but at no point do you think she's not in control of everything around her. She remains a brick wall of a character throughout these issues, when you compare her to someone like Flass, a giant of a man who comes off as soft and cowardly by the end of it all. I especially liked her motivations to become the Catwoman and why her style is much more violent than Batman's.

If I had to pick at something, it would be the font:

This was especially more annoying to try and decipher as I had just watched this video the day before:
What that video more or less states is that, before modern techniques, fonts were handwritten before they were mass printed out to all the shops. They were normally kept nice and simple to make it easy to read as the prints and the quality of paper was nowhere near what they use now. This comic must have been a fucking nightmare back then as I found myself at the mercy of these curly bastards. It was just unnecessary and only Bruce's speech was in this font so it clearly wasn't some kind of budget issue or Miller incapable of picking another font he liked. This meant that some pages didn't flow as well as for me and I found myself re-reading the odd bubble to confirm what I thought I'd read.

The main tale is riveting too. On top of what you already may know of the already famous fable, we get to see the biggest men in the city try and take down the Bat, Bruce making his mark in the city, Jim Gordon violently climbing his way up the ladder and an explosive finalé full of action and excitement without the use of a stupid blue beam stabbing the sky to try and feign for your attention. Not all superhero finalés need this. I'm talking to you Hollywood. If you're a Batman fan who hasn't read this yet, it's most certainly worth picking up, on the other hand, what if this is your first time? Should you let this be your door into the world of the Batman?

Back in 1995, this was released in South Africa to introduce Batman to the country and that made sense. It was a great way for them to start. After all, it's a great read that contains moments that it's grabbed from the past and contains moments that went on to inspire and be used...but if I had to be honest, it's not where I would want my Batman journey to start.

Yes it's got action. Yes it shines a new light on a classic story and there were occasions where I found myself going "Yay, Batman!" however, whilst sometimes it felt great to feel like I was there reading the 1939 comic, sometimes the comic came off as 'dated'. Maybe it's not my the kind of Batman I want to read about. Perhaps I prefer him older and more scarred. Also like I said before, Jim Gordon definitely gets centre stage here. Not everyone wants that from a comic telling you the origin of Batman. That's why we're not all watching 'Gotham'.

I'm sure this may ruffle some feathers but I just think that whilst this is a very good comic, It's not 1995 anymore. The world has turned and now there's far better tellings of this story, for instance 'Batman Begins'. A film that is very much inspired by this novel and portrays it much more realistically for a modern audience. "Okay JB, but what about if realism doesn't bother me, I want to feel like I'm reading a Batman origins comic?" Then why not try 'Batman Zero Year' the New52 version of the tale, which varies greatly from this but still shines just as bright a torch to Detective Comics. "Okay JB but what about if I want to read Frank Miller's interpretation of this great story?" Well then, I would maybe suggest you go and read 'Daredevil: The Man Without Fear'.