Ok, so this was the moment we have all been waiting for…the much anticipated reboot of one of Marvel’s most underrated superheroes. In a way there was an awful lot, yet at the same time, not a lot riding on this. Seeing as the 2003 Ben Affleck film was so bad that they could do anything and it would be an improvement. Marvel could have played it lazy, easily churned out something generic and wham, bam…there’s your Daredevil of 2015 to slot nicely into the new MCU. But it is safe to say that this they did not. Besides fans of the comic, not a huge amount of people were aware of or more to the point, gave much of a shit about Daredevil before this show aired. You can be sure as hell all that is about to change. ‘The poor mans Spider-Man’ he is not and ‘Marvel’s budget Batman’ no more. Marvel have redefined this hero right before our blessed eyes. And he’s cool as fuck. Matt Murdock and his story have been adapted to screen here from the source material so perfectly, that it is strong enough to stand both alone, and shoulder to shoulder with the best of Marvel’s heroes. But this Daredevil is his own kind of superhero. And he’s bad ass.

​As for myself, I’m a fan of the Daredevil comics, and have been for quite some time. So for me, I was hyped for this show. So much so in fact that I’ve had the date written on my calender for months, and was constantly checking on Netflix the night before it aired at midnight, to see if it was on there yet! After setting my alarm for 9:30am the following day, I awoke like a kid on Christmas morning, desperate to dash down stairs to see what wondrous gifts Santa had in store for me. But instead of Santa, the red clad hero is a violent vigilante on a mission for justice and I won’t be galloping down any stairs today…at all. In fact I won’t be leaving my bed. I got myself settled in for 13 hours of pure pleasure viewing. The binge watch to end all binge watches. And yes, 13 hours later I was emotionally drained and satisfied (And at the same time slightly disgusted with myself).

As for the show itself, the first thing that struck me was the beautiful cinematography, and gorgeous colour pallets used. Some of the scenes look like they were pulled straight out from the pages of the comics. But subtly done, and not done over the top or distracting. While every frame is pleasing on the eye, they somehow maintain the balance of gritty realism, and comic book style colouring. Hell’s Kitchen looks devastatingly menacing and moody, yet mesmerising. It reminded me of how Gotham City is portrayed cleverly as a character within itself. Hell’s Kitchen lives and breathes, writhing under the grimy heat, and breeding unspeakable crimes.

After I managed to pick my jaw up and wipe away the drool from my mouth after gorging my senses on the fantastic visuals, I was once again falling in love, but this time with the casting. Foggy was probably my favourite casting pick. Elden Henson is perfect for the role, providing a well written comic relief aspect to the show, sticks close to the humour of his character portrayed in the comics. Stick was a close second. I mean look at this guy. He looks as if he’s been ripped straight from the pages of the comic! Good choice Marvel. 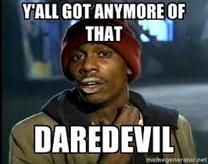 ​Matt Murdock’s origin story is explained in a series of flashbacks which pop up at relevant parts throughout the series, which is a refreshing and well thought out change to the boring format we are usually subjected to in the guise of a dull dragged out origin story followed by the predictable Rocky-Training-Montage, and struggling with your powers scenes, before all the cool action starts. Here we are treated to a fight scene in the opening moments of the show! It’s clear from the get go, that Daredevil is not your average bear. I pretty much love everything about this show, even down to the opening credits. Marvel have surpassed themselves with this one, and it’s a welcome change to see the darker, more human side to their ever expanding on screen universe. Marvel have most certainly quashed all taunts from DC of ‘not being gritty enough’ on screen and suitably bashed their heads in with a bowling ball. This is a huge step for Marvel and a big departure from the colourful PG-13 genre they have safely stayed within the boundaries of so far. The graphic violence on offer here comes close to Watchmen territory. But it’s never gory for the sake of it, those particular scenes are executed brilliantly. There are a number of iconic scenes to feast your bloodthirsty eyes on here, that you won’t forget in a hurry. They’ve also done an incredible job on the fight scenes (Episode 2 especially – you know what I’m talking about.) And Vincent D’Onofrio as Wilson Fisk is something else. A very original take on the villain, and a powerful performance that will make your skin crawl! All in all this series has matched all expectations, and then some. And in my opinion, a contender for one of the best comic to small screen adaptations of all time. At last they have done this character, and the world he lives in justice...

​Not wanting to give away any spoilers, I won’t go into the story, but I can tell you that it’s a well written plot, with brilliant acting. It has twists, turns, beats the crap out of you, smashes your head off with a car door, and ultimately leaves you gagging for more. With the way this series ended, I have high hopes for what’s to come, and now I just want my next fix!


I’m excited for the next Marvel Netflix series tie in, ‘A.K.A. Jessica Jones’. Ultimately this will all lead up to a ‘Defenders’ crossover miniseries, which I’m already confident in saying it’s probably going to be awesome. I’ve always been more into DC than Marvel, but after Guardians Of The Galaxy, and now this, I can safely say I have been suitably swayed over from the dark side. “I believe in Harvey Dent?” screw that, I believe in Marvel! If you haven’t already jumped on this show, you need to do it now. Be sure to leave me some feedback in the comments section below. What did you think of it? Are you one of the very few who didn’t totally blow their load over it?! 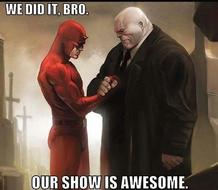