DC FANDOME: THE FACTS AND THE THOUGHTS

But what worked and what didn't? In this blog we'll try and tell you everything that got revealed, what it means, how the whole DC FANDOME streaming experience was from the point of view of a nerd that has attended plenty of COMIC CON live events, and did this work? Let's get stuck in!

Yes, as well as news of the upcoming film by James Gunn, DC fans were treated to the news of a video game of the infamous anti-hero gang of misfits.

James Gunn himself revealed who each cast member was playing, along with a montage of film and behind the scenes footage.
However, DC have proven themselves to be meddlers in such projects, and the last SUICIDE SQUAD was a fucking mess. Thank God they let James Gunn host and manage this section. He handled questions brilliantly, exhuded genuine confidence about the project and the footage released does make this film look a hell of a lot of fun. But what about the game?

​Prior to this stream, ROCKSTEADY games had leaked posters and hints at what this game would be about, and it's safe to say the trailer easily conveys and confirms what most people thought.
One issue I personally saw raised on Twitter is that people look like they are tired of the "What if Superman was bad" concept. I understand that feeling. We already have INJUSTICE, and we just had a few animated films exploring these themes. That being said, I feel like that view would easily subside if the game was as solid as SPIDER-MAN on the PS4 or any of the Arkham Games. Speaking of which...

If you don't know what this is, then where have you been? Simply put, the #releasethesnydercut movement barrelled towards WB front doors so hard and often that they caved and decided we are allowed to see Zack Snyder's intended cut of JUSTICE LEAGUE.

The trailer reveals both extended and new scenes. We also get a look at an early CGI Darkseid and we were told it would be a 4 hour long film divided into 4 episodes
BLACK ADAM NEWS
​
Still no trailer. Instead a concept/teaser video showing ideas and some plot points about the long awaited BLACK ADAM film. The Rock himself made an appearance asking that fans wait a little longer for them to put something together, having already kept them waiting since 2014 when this was announced.
WW84 TRAILER

Along with Venus Williams bizarrely having an interview with WONDER WOMAN 84 director, Patty Jenkins, we got this new trailer. 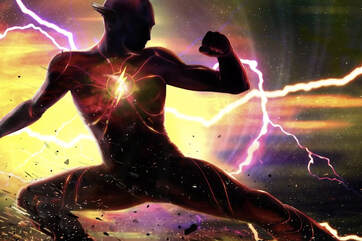 OTHER NEWS AND SURPRISES
We got to see what the new Flash costume will look like (kinda), the possible new title of SHAZAM!'s sequel (FURY OF THE GODS). If it isn't fully confirmed, is it news? We learned that Barbera Gordon, Scarecrow and Jason Todd becoming Red Hood, are appearing in the next season of TITANS, and that a STATIC SHOCK film is in development, along with John Ridley revealing his 4 part Batman comic series will likely feature a Batman who is a person of colour.

WHAT DO WE THINK: I'm always excited for characters being added to TITANS because that's MY DC live action universe, and Jason becoming Red Hood could play out really well in that show. As for everything else, it's all words and no substance. Flash's suit may look totally different. Ridley may keep Batman white, and SHAZAM! may change that title. It's all forced speculation and non-news for now and all these "announcements" proved to serve as nothing other than filler.

What a fantastic treat this was. We got a trailer for the Batman film, Matt confirmed he's working on the GOTHAM P.D. show, also that the film is set in Batman's 2nd year, whilst Pattinson assured people he wants to get back to filming as soon as possible.
DID DC FANDOME WORK?

It is most definitely a work in progress. The hosts were as annoying as any Eurovision presenter, and came across like your mum trying to talk to you about your favourite comics. After any section, it would flash up on your screen to buy or stream a show, like you wouldn't know about these long running shows, which felt like a desperate cry of "PLEASE BUY THIS!" marketing. There were definite issues with the stream as well. I thought it was poor that once Snyder was on the stream it was buffer city for me. I then heavily relied on Twitter for announcements and to watch trailers. But I'll take that all as teething issues.

There was some great insightful sections (I really enjoyed Greg Berlanti and Jim Lee discussing the multiverse), some interviews and moments were quite memorable (James Gunn and Ezra Miller had me laughing...Ezra Miller actually made me laugh!), there was some funny filler to balance out the bad filler (I especially enjoyed Batman Beyond narrating an episode of Batman 66), and some smaller news garnered my attention more than other supposed "announcements" (I am looking forward to watching that in depth documentary about the Joker: Put on a Happy Face).

All in all, this was one of the first times DC took over the internet properly. In the past, I've always felt like Marvel have a reserve bottle of piss ready for any bonfire DC try and start (remember them annoucing their movie line-up for the next few years, and Marvel releasing the next phase but days later?). This was a very obvious move that I am surprised more companies haven't thought of doing. Yes, STAR WARS has celebration day and MARVEL are technically part of D23, but this was definitely their own thing, and made every one of my feeds on my phone FULL of DC properties and news ever since. This was a win DC so BADLY needed, and hopefully they can take this excitement and energy with them into the comics department, and stop that from imploding on itself.