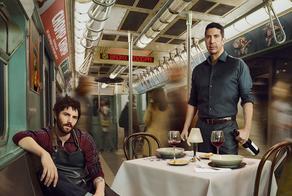 I am of the belief at the moment that TV is surpassing cinema and it's about time too. Cinema has such a finite amount of time to develop a story and characters in comparison to a television show, now not only do I expect films to match the quality of entertainment on my TV, I expect TV to be setting a gold standard. I want Michelin 3 star shows. With that being said let me bring you tonights dish, 'Feed the Beast'. Warning: Whilst containing no major spoilers, this review may contain slight traces of plot points.
​
STARTERS

'Feed the Beast' introduces itself as the tale of two best friends with a brotherly bond called Tommy Moran (David Schwimmer) & Dion Patras (Jim Sturgess).  They have a dream, to run a high class greek restaurant in the heart of one of the roughest parts of New Yorks concrete jungle; 'The Bronx'. Whilst having to contend with the uphill battle of being told their dream is impossible and setting up a restaurant from the bare bricks up, they must also face shady characters from Dion's criminal past and Tommy's struggle to shake off his demons from losing his wife to a car accident and his sons apparent PTSD from it all. I love the idea of watching such a business being started from the ground up. It helps that I also love cooking and I love the food I eat, add this on top of the gritty gang related drama and this could make for good television.

I think that any of the cast of 'FRIENDS' have real issues working in anything else as you just see them as their character instead. I mean let's be real here, how many of the 8 of you who watched the new series of 'Top Gear' saw Matt Le Blanc and thought "JOEY"? It's just the curse of the show. It certainly looked like David was going to be Schwimming upstream here to win me over but you know what? He embodies this role really well. An alcoholic wine taster, stuck in a whirlpool of sadness after a major loss, who hasn't quite sunk yet because he still has a son to give him a link to the past and a light for the future. It would have been easy for David to come across as 'mopey' and very 'Ross Gellar' but there is anger behind the tears. It certainly helps that he has Sturgess bouncing around the scenes too. Sturgess isn't just another bad boy rebel. He's not another character with wasted talent. He knows he's good at running a kitchen and cooking food and that gives his character more depth. When these two are side by side and you see the whole of the sum of the parts, you ask yourself, "Are they carrying each other or is one of them dragging the other down?", it's really hard to tell and was one of the more enjoyable parts of this series.​

​I also liked how the restaurant became a character in itself. Another player that they had to deal with amongst the rest of their daily dramas. Assembling a team, designing an original restaurant and at the end would anyone travel to such a rough neighbourhood to visit?  Would they make something glorious or create a monster? It gave what could easily have been shoved in the background or montaged over the sort of gripping element I find from watching the Apprentice. This sense of realism of how hard it is to get everyone on the same page about a passion project, how sometimes it can all seem like too much and it's just easier to call it quits. I admire it for taking that route. Which made it disappointing and all the more harder to swallow the actual plot they end up focusing on...

The main underlying thread of all this series is Dion's past coming back to haunt him. A gangster who calls himself, and I quote, "The Tooth Fairy", comes back to collect on a large 6 figure debt from a freshly released from jail, Dion. Obviously not having that money on him at the time and after threatening to remove his teeth (that's his 'thing') Dion is convinced to return to his original line of work and to start up a restaurant business again in order to pay off his debt. Dion approaches Tommy and begins the hard work of convincing him to do this whilst never revealing his underlying secret that this is all to save his sorry ass. This in itself was a nice twist on the story that I enjoyed thinking about through the episodes. At any point Schwimmer could just walk away and lose nothing but Sturgess's character had everything to lose and had to think of other ways of keeping Schwimmer on his side without revealing that he was inadvertently getting his best friend and his son involved with "The Tooth Fairy".

Whilst sounding a bit of a stupid name, he isn't that bad an antagonist for the story at hand. His relationship with Dion is complex and there is enough history between the two that is slowly revealed more and more each episode as to why he seems to have his crosshairs on Dion. Michael Gladis had definitely been to the Netflix Daredevil academy of bad guys and picked up one or two qualities of the Kingpin. Add that to the debonair and coolness he evoked in a 'Jim Sterling' sort of manner, he definitely fulfilled his role as the bad guy. Think about it, what is one of the worst things that a chef/restaurant owner could face? A debt collecting mobster who pulls out your teeth as well so you can't eat again!

​Here is where I begin to get a bit full, you see the rest of the cast just don't really hit the spot as well as the entreés before. TJ, Tommy's mute son who I haven't mentioned much of yet, is so annoying. From the get go I can tell that the arc of this kid is this; by the end of the series, he's going to speak. It's about as obvious as it is annoying that he doesn't speak! Situations that could easily be resolved by him saying "I witnessed that" or "I can explain what happened" are left to turn into extreme situations which the story didn't need and deviated away from an already great plot. And when you hear him speak it's disappointing. Like a bizarro Susan Boyle. His main story is he is being bullied by one kid in school for no reason at all. It's so empty a plot point that you just kind of don't care. I ended up liking the bully more than TJ. He at least did something.

In fact if there is one thing this broth suffers from, it is too many cooks. You have Lorenza, a young pretty woman Tommy meets at his grievance counselling/meeting, who lies about her credentials to work in his restaurant and whom he ends up getting involved with. This is just sort of painful to watch as it doesn't make sense. They don't have anything in common other than dead spouses and Schwimmer is nothing if not resistive and confusing to her advances. It reminded me of that couple from 'FRIENDS' who were on again, off again every season...

Her character sticks out from the rest of this cast but not like a diamond in the rough, more like a sore thumb. I just didn't feel she 'belonged' in this story at all and maybe that's why Tommy doesn't exactly jump into bed with her right away. The only times he ever hooks up with her in the series, funnily enough, is in the middle of a shift....when they're on a 'break'. 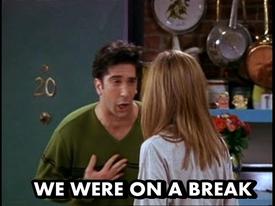 You have Tommy's dad who wants nothing to do with him, apart from funding and trying to run the restaurant. And hang out at least once a week with TJ. He's ill as well but won't tell Tommy. Because he wants nothing to do with him, remember? You have Dion's Uncle Stavros, a dodgy businessman who has all the time and advice for Dion, often acting as a "Get out of Jail free card" for the writers of this show, seeming to be able to get Dion out of any corner they may have painted him into. Then there's Dion's lawyer, "Red Thunder" who is romantically involved with him and Officer Dibble who has vendettas against Dion and "The Tooth Fairy". No his name isn't actually Dibble and she's not "Red Thunder" but I genuinely can't remember their names and that says something about these characters who all end up having links to one another. Like someone thought they were writing a terribly clever Greek tragedy but ended up writing 'The Amazing Spider-Man 2'. In fact, it all becomes a bit too much.

This wouldn't all matter if it was clever writing but it really isn't. This is none more valid in a revelation that is revealed about Dion's history in relation to Tommy midway through the season. It comes out of nowhere and doesn't make any sense as there hasn't been anything leading up to it to suggest it. Then the we spend the next two episodes dancing around whether it is true or the inner workings of Tommy's mind at play, which isn't a bad twist if it were not for the direction it decides to commit to. It just felt cheap, unoriginal and tacked on to a story that just DIDN'T need it. It already had everything already in the thrill of keeping their restaurant, "The Beast" you could call it, running and on course. This was what made Breaking Bad irresistible. Yes these guys had stuff going on outside of their meth lab and different matters at stake, but you were watching this empire be made, maintained, managed and crumble. Instead the restaurant plays second fiddle to some uninteresting back stories and to be honest I think the writes even forgot what they were writing about. A good example of this would be Dion's drug taking. In the first half of the season he is as high as a kite on cocaine every episode, even picking up when TJ is with him. The second half of the season? This habit/characteristic is no longer a part of who he is and no  one seems to notice

In all honesty this is a really strong idea that just seems to have made some poor decisions midway through. Given how the season ends though, it leaves plenty of potential to start slightly afresh and get rid of the problems I've mentioned right? Well, that would be a possibility if not for AMC announcing its cancellation last Friday, which has actually made me realise that I did enjoy watching this and I am pretty gutted I won't get closure on Tommy and Dion's story. But it just goes to show how cut-throat this industry is and how high the bar has been set in television. Now if we could only have that same level of expectation for films and maybe we wouldn't have gotten 'Alice Through The Looking Glass'.
​
By Jay Burdett follow him on Twitter @ProJub