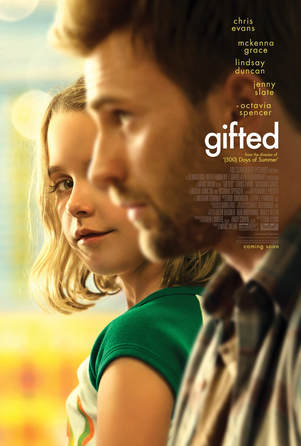 Every now and then these unknown films come along which, somehow in today's modern world of mass advertising and mass promotion, have managed to pass me by without a single piece of knowledge or graphic ruining it for me. That is a marvel even more when you consider the leading man is none other than Captain America, Chris Evans, so this is no small time movie. The director Mark Webb has also been responsible for the Amazing Spider-man series and a well received film; 500 days of Summer. This does beg the question as to why this film wasn't pushed just a little harder because I do believe this is a good solid drama, well worthy of attention far and beyond most others that are pushed by the big billboards seen on various roads, bus stops and train stations.

In its essence this film is made better by a good strong cast in key positions. Evans, far away from his most known role of leading Captain America into battles in the MCU, delivers massively as Frank Adler. A man thrust into fatherhood by his sister who leaves him to care for her daughter as she tragically commits suicide. He raises the girl in the way he believes he should, enabling her to live her life with friends and happiness despite the girl being a gifted mathematician even at the tender age of 7. His charm and warmth shine as he and the ridiculously brilliant McKenna Grace, who plays 7 year old Mary, share a fantastic on screen chemistry throughout. McKenna clearly should have a bright future, never does it feel forced at any time and I really believe with the strength of child actors at present I do wonder why there isn't an award at the Oscars for young actors and actresses. If there was this would certainly be up there as it’s a great performance.

The drama truly unfolds as grandmother to Mary, Evelyn (played by Lindsay Duncan) arrives on the scene. A mathematician herself, she tries to claim Mary is too gifted to stay in her cosy lifestyle with her Uncle and instead tries to fight for custody. It's a sincere performance from Lindsay too and again a really good chemistry between a mother and son who don't get along adds a genuine touch to this film. The writing is excellent and it gives a very sincere story with enough humour to make it a really enjoyable watch, even around the more hard hitting dramatic parts.

The film is predictable, no doubt, but I don’t think that takes away from a good story and the great acting that is put before you. Credit must also go to Mark Webb who gets the feel and look of the film absolutely spot on. A particularly great scene that shows the chemistry between Frank and Mary features a sunset behind them and it looks phenomenal, cementing and adding to the a scene that just there to show the audience the unique bond between the two characters.

Overall this movie captures you with its warmth and due to some great performances from the leads (I should also mention two good support roles from Octavia Spencer, Jenny Slate and a one eyed cat called Fred), this film really is a gift in itself. So when you just want to feel a little bit of love, something to tickle your soul, it might be worth giving this one a go.