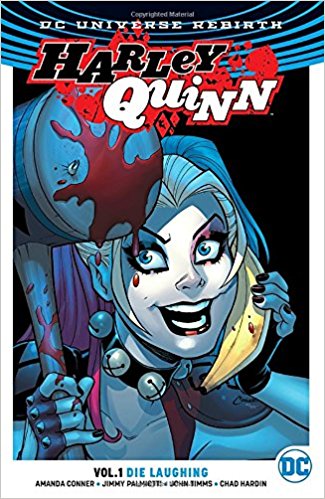 First of all let me start this review by saying; this book is fucking ridiculous! Once you accept this fact, only then you can truly enjoy this silly romp of a comic. And what a silly romp it is! The premise at the start of this book is that an alien from outer space crash lands on earth, and accidentally gets made into hot dog meat, which the general population of Coney Island consume and subsequently become infected, turning them into flesh eating zombies. Yeah, I know. So of course it's up to the ever perky Harley Quinn, and her samurai sword wielding merc with a mouth friend, Red Tool, who wears a black and red costume and is definitely NOT Deadpool, to save the day. See what I meant by not taking this book seriously!

​But you wanna read this car crash, right?! Maybe not. Okay, for you purists who are yelling "That's not how Harley Quinn IS. She's represented poorly. They've ruined her. She's a completely different character to how she was in the Animated Series." I say, yes, you're right. This is something else you need to accept in order to have fun with this book. If you want that Harley, don't read this. Go watch the cartoon. Or read a Paul Dini book. This is a new incarnation of the character. A complete departure even. But look very hard and it's still Harley at the core. The quips, the endearing gung ho attitude, the playful minx that we all fell in love with all those years ago. And any Harley fan worth their salt should give this book a chance. 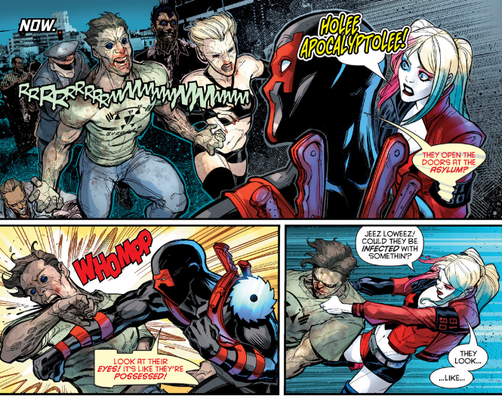 Upon first read it does seem as though the writers just thought "OK, what's hot now? What can we give them that the kids will love?" Why, Deadpool and The Walking Dead of course. On that we get this crazy mix of zombies and comical superheroes with plenty of gore and slapstick. And you know what, it kind of works! It could have easily gone tits up, but it seemed as though the writers had upped their game since the last run. Rebirth seems to have invigorated and put them on the right path. More than likely thanks to the input of the main man Geoff Johns, who is now the Chief Creative Officer at DC Comics, and personally oversaw each and every DC Rebirth issue one to make sure everyone was on the same page.

Rebirth has been fantastic for DC so far, and something they desperately needed to do. Thankfully they pulled it off really well. And we've had some great books to come out of it. This is one we can add to the list. Granted it's not up there with Batman and Trinity, but it's something the casual comic book fan can pick up and enjoy. And wasn't that the point of this whole Rebirth overhaul? Also it's a welcome relief for the die hard fans who were fed up of the last run and couldn't wait for it to end already! Myself included! I'm not going to lie, I was hoping that Jimmy Palmiotti and Amanda Conner would be taken off as writers and we would get someone new to pen this book. But as I mentioned earlier, they seem to have had a rocket up their collective arses (readers of the penultimate issue to the last Harley Quinn run will get that joke) to sort their writing out. This is the fresh start they so desperately needed. The dialogue is better, and more quippy than juvenile. The book was starting to read like it was written by ten year olds towards the end of the last run. Now it's more focused and clever. Think more Spider-Man and less Viz. The story has more scope, and more is at stake. Instead of challenging small time crime and environmental issues, Harley and her band of very diverse miscreants are pit against more dangerous foes, and face bigger, more action packed scenarios. This makes for much more visually appealing action scenes. Which are drawn really well by artists Chad Hardin and John Timms. There are some great fight scenes to feast your eyes on here. For the art alone, this book is worth it. 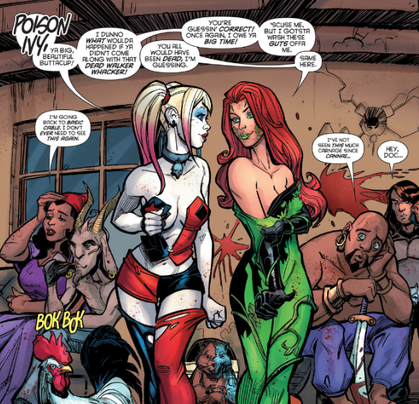 ​At this point I'd like to mention that all of those positive points are referring to the first half of the book. After that, it goes downhill very rapidly! After a promising start with the alien infected zombies, we now take a enthralling plane journey to Mumbai to take down a corrupt call centre (?!) where they have to fight a robot that looks a lot like Thor, complete with wings on the sides of his helmet and hammers for hands. Oh and he's referred to as "The God of Thunder and Lightning"...I know right...wtf? And not in a good way. It's not funny anymore, just stupid. It seems as though after Geoff John's mentoring gaze was averted from this creative team, they're back to their old tricks. Same old lazy writing, with sub par plots, immature puns, perplexing scenes, and boring as hell story lines. Even the artist seems bored with this story.

So after the weird semi racist call centre intermission story line, we get the story that ends the second half of this book, which is entitled 'Undercover Punker'. And it's about as lame as the title suggests. The basis synopsis here is Harley gives herself a Mohawk and forms a punk band with her misfit mates, in order to infiltrate an underground punk scene and avenge the death of her mailman. They just love the randomness in this book don't they? This is ultimately the big downfall. 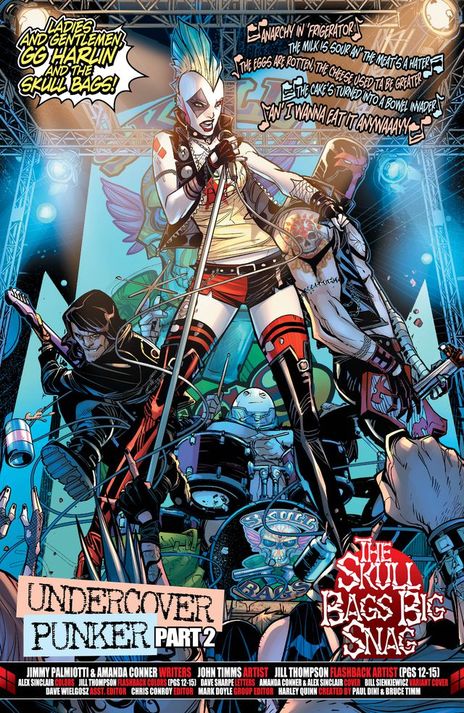 There's a scene here when Harley is performing on stage as vocalist in her new band 'GG Harlin and the Skull Bags', where completely out of the blue she pulls a heckling audience member out of the crowd on stage and very graphically beats seven shades of shit out of him with a microphone stand and a bass guitar. Rock and roll?? It's funny right? Nope. That's assault, sister. It is later explained that the guy was a plant. But that's besides the point. It was completely random and out of character. It did not fit into the tone or atmosphere of the story at all, and completely took me out of it. Oh, and after that she continues to thoroughly embrace the vile traits of her namesake (the human cum stain that was GG Allin) and proceeded to throw dog shit into the crowd. This writing, man. It's not big and it's not clever. But the problem is, is it even aspiring to be?! I honestly believe that the writers either don't give a shit, or genuinely don't get how to write this character correctly.

Even the dialogue seems strange and forced. Way too babbling and unnatural. Not just for Harley, but for all the characters. Things get repeated all the time, and the obvious is stated way to often. Dumbing down to the highest degree. And I'm not contradicting myself, as I mentioned earlier, this can be an enjoyable read if you accept that this Harley is a completely different character. And if you happen to be its target audience (I'm presuming anyone under the age of 18 or someone who has a streak of immaturity). However for fans of the original Animated Harley Quinn, like myself, will not dig this book.

Aside from the first half of the book, which I actually surprisingly enjoyed, I believe the only saving grace in this book is the art. Well most of it anyway. The art by Joseph Michael Linsner in the '108 Million Ways To Die!' story, was just shocking, I'm sorry. I hated that part of the book. For many reasons. But the art just added to that shit sandwich.

To conclude this fittingly erratic review, to match the personality of Ms. Quinn, I will say that Die Laughing is a very uneven, tonally strange collection of comics, that falls flat on its rather shapely arse, and really doesn't work in trade paperback format. I honestly believe this run would be better on original publication on a monthly basis. Which is an odd thing to say. But this is a very odd book. After a promising start, it very quickly falls apart at the seams. It's a shame really, as it had real potential. Now I'm genuinely concerned as to the direction in which this title is going.

The Harley Quinn Rebirth is a mile away from being a runaway success like her respecting Gotham and Metropolis dwelling associates. However we shouldn't expect it to be. Or should we? Comparing Harley to these behemoths would be unfair. Would it? With the massive status and following that this character now has due to her on movie debut in Suicide Squad, we should expect her comics to hold some sort of standard for this beloved character. The potential is there. These books should be great. One thing is for sure, you wouldn't catch Margot Robbie playing the Harley Quinn we read in this book. If purists weren't happy with Harley's portrayal in Suicide Squad, they'll loathe what they've done to her here!
​
I'm gonna succumb to the purists here and say we need the old Harley back. This just isn't working. We just need some decent writers put on this book. Sure she's goofy and wacky, but she's got heart too, and she's smart. We need that sassy as fuck, razor sharp witted Harley back. The lovable psychopath who nobody in their right mind would fuck with. She's a great character, full of substance and fun. That's what we need to see in her books. What we have currently is some weird warped version of what the creative team THINK the public wants Harley to be. They're missing the point entirely. We loved her already.​