THE HEROIN DIARIES (2018) - HEAVY METAL COMICS
WRITER - NIKKI SIXX, ADAPTED BY RANTZ HOSELEY
ARTISTS - Danijel Zezelj, Patricio Delpeche, Kelsey Shannon, Roy Burdine & Kieron Dwyer
MY RATING - 7 / 10
Fast forward to the noughties and Nikki Sixx is not your average 80's rocker. He's not washed up, dead, or strung out on drugs like how many (himself included) predicted. He's not a man of God, or growing pumpkins in a forest (like Jim Martin of Faith No More). He is trying to find his place in the world, so in 2007 he releases a book titled 'The Heroin Diaries - A Year in the Life of a Shattered Rock Star'. Based on a diary he kept when he was on the brink of death in 1987, he annotates his views on every page (along with family and friends who also comment on the events he has documented). He even forms a band to write a soundtrack to it. It's a hit. All of it. And he donates 25% of all profits to his charity 'RUNNING WILD IN THE NIGHT' that helps to rehome and rehabilitate homeless children. And then that's it. On to the next project...or so we thought.

A graphic novel interpretation of this book never even crossed my mind. But it makes total sense. The guy, and the band, are real life comic book characters. Like KISS or Alice Cooper, but I don't think they would ever be allowed to hang in the Mystery Machine with Shaggy and Scooby. And maybe it was my childlike excitement building it up, but unfortunately, what should have been an easy 10 out of 10 for me fell at various hurdles. I even think that a 7 may be too high for the average reader, if I'm honest. So what went wrong?

Well it certainly isn't the artwork of design. I loved that the book and pages were all the size of a vinyl. I felt like I was flicking through the artwork of a record I'd picked up. All the artists do a fantastic job. I'm not sure who to associate with what if I'm honest, there's 5 people who worked on this! And I think the comic needed it. So many times Nikki's stories  and memories fade between very different tones. They can go from fun lovin' antics to 'Trainspotting'-esque darkness in a flash. Whilst the 80's can be looked at as quite debauched like a Roman orgy, what Nikki went through was more like a Greek tragedy. All the artists brilliantly contribute their skills to capture the mood of what's going on. The same chiseled and broad hero of the book can change into a stick thin charcoal image on the next page. As the heroin seeps into his veins, as do the haunted images onto the next page. I cannot stress enough how powerful the imagary is, I can only think that's what pushed Nikki to do this. Seeing the words I read over 10 years ago interpreted into a brown noir really escalated how shit and depressing these "party" drugs really can be, and in order for your life to be as colourful as a unicorns vomit you have to become creative and talk to people. Not wallow away in squalor.
Where the book really let me down, was whomever was responsible for the actual printing of words. I'm a grammar nazi. I don't do it to be a dick, I just love how amazing and powerful words can be, so when sentences are contructed into shells of what they once were, it really knocks the wind out of my sails. Too many times in this book are words missing from sentences. Bear in mind, the whole point of the book is meant to be a graphic novelisation of these diaries. All you had to do was add art. YOU HAD THE WORDS! All you had to fucking do is put them on the pages! Even a chapter is named wrong, and this isn't me being a total fanboy. I'm not some dude watching a tribute show getting pissy because "Jimmy Page doesn't actually hold that note for that long in the solo", these are basic grammatical errors, spelling mistakes and omitted words that ANYONE who has left primary school could spot. That chapter I mentioned? It doesn't even make sense as a statement. And words are only as powerful as how they're written out. Sixx is a wordsmith so it's a shame to see his poetry battered and bruised like this. 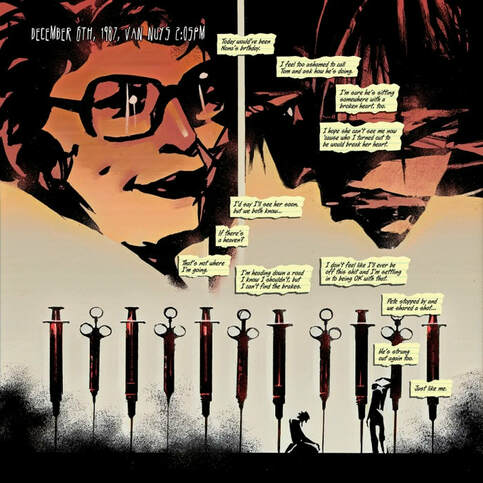 The final kick in my Motley Balls was that this comic felt rushed in parts, and none more noticeable than the end. I can understand why we can't spend as much time soaking in the ambiance of some moments like we can in the written version, however I take fucking umbridge at just ending it (and no spoilers here) with "And then I realised I shouldn't be a dickhead anymore. So I quit drugs. End."

My mouth was genuinely ajar at how bluntly this had just cut off. You've been riding this mad wave with ups and downs and instead of crashing into the flotsam and jetsam, submersing yourself in where you've been and what you've learned, you just stop dead on the beach, get in your car and drive away.
And these flaws and mistakes are a massive let down for this book, not least for the true heads who have read the original and eagerly anticipated this, but for all the new readers. Untouched by their music, and his previous work, this has the potential to reach a whole new demographic of people and what will they see? A badly translated comic, that seems unfinished and unnecessary in the grand scheme of things, which is sad. If even one person could pick up this comic, read it, put down their bindle and smack, and walk away, that would be amazing. But since this has been pulled off with all the grace of an epileptic swan flying through a strobe light show, that may not happen as much as one might think.

I wanted to say this book would go down as one of my favourites, but instead it goes down like a high class hooker. And by that I mean it sucks dick. It's not awful by any means, and reading it did get me excited about the upcoming 'DIRT' movie about the band. And it did make me want to return to his books and music again. It's worth a read, on the other hand you'd probably get more out of the books, so go figure. I just feel that in the long run, this just won't do enough to kickstart some hearts.