I had an idea. It was a small one, or at least I thought it was. I wanted to list a few of my favourite action scenes in comic book films. So down a rabbit hole of amazing moments I descended and I must have changed my mind how to contruct this blog many times. First I gave myself rules, then a set amount I could pick, blah blah blah, until I settled on the very niche, but very satisfactory "Action scenes that make the hair on the back of my neck stick up". These scenes aren't just great or pretty awesome, these are legendary. So if you think some scenes are missing, it doesn't mean it wasn't good, it just might not meet my high standards. Besides, you can always have more than one greatest hits...

Because of this style, Raimi was able to sneak an Evil Dead scene slap bang in the middle of SPIDER-MAN 2, and it's phenomenal! It seemed appropriate for me to begin with this one as this scene is the one my mind first randomly wandered to. I love everything about it! How it's shot, Doc Ock's look, how the tentacles move and the aforementioned weird stuff that WOULDN'T be there or be said in real life. Why is there a chainsaw in the operating room? They already clearly had something to cut the arms off with. And the "shopclass" quote would be a weird joke before beginning an operation on such a tragic victim. REGARDLESS, I freakin' LOVE this entire scene and can not wait to see Raimi work his magic on Doctor Strange 2.

INTO NO MAN'S LAND (WONDER WOMAN)

I cannot tell a lie. I didn't realise how much I loved this scene until I rewatched it for this blog. I mean, I remember loving it however, I didn't realise how much it moved me. I sat here unsuccessfully holding back my sobbing whilst watching it. I don't know if it's because of the hope she symbolises, if it's the harsh reality that nothing like this happened and the sad truth hits me hard, or that the whole scene is just so damn heroic.

Diana has many amazing moments in this film. From her clever dialogue with ignorant 20th century chauvinists, to incredible fight scenes kicking Nazi ass, yet this one is above all of them. It's powerful, it's moving, it's wonderful. So much so I worry about the looming sequel and will it contain ANYTHING remotely as good as this scene.

SHAKESPEARE IN THE WOODS (AVENGERS 2012)

This scene also brings out the roman emperor in me too, as I find myself not rooting for anyone in particular. I'm not hoping anyone knocks out or stops the other one. I'm almost cruelly enjoying these guys kicking each others asses. Hell, I most definitely AM enjoying them kick each others asses. And that's why I put it in this blog! Avengers is one of my favourite films of all time and it was hard to pick the defining moment. Whilst I did lean towards Hulk's "I'm always angry" line, this seemed more appropriate. It comes before it and is a lot more contained. Watching it on it's own, without the rest of the movie before it, doesn't take anything away from the magic in this scene.

I initially went to pick the first Quicksilver scene from 'Days of Future Past'. However, when I watched it back I just didn't click with it as much. Its tone seemed off, like it wasn't sure if it was meant to be silly funny or an epic movie moment. I couldn't place it. As much as I dislike the X-Men films, I distinctly remember enjoying Quicksilver's scenes. In a mood with myself for perhaps 'growing out' of that scene, I begrudgingly watched the second one from X-MEN: APOCALYPSE, and you know what? I love it. As much as I think this film is garbage, this scene is a welcome moment. A light in the dark, as it were.

It steps straight in from a serious moment. The entire school is threatened with an explosion that will kill every man, woman and child in the school. It's quiet. The bees are flying around some flowers outside. The bees wings slow down, the synth from the Eurythmics creeps in, and a massive smile appears on your face. Yes, it's silly. Yes, it's absurd. But you cannot deny it's entertaining to watch! You're cheering him all the way, deep in wonder how some of the students are going to be saved as he flings them wildly in the air. It almost comes unexpected as well, even though you've seen it before, and that means it has a smidge of movie magic about it in my books.

So sit back and watch a scene that only sweet dreams are made of.

This is the first time I feel that the Batman from the comics truly lifts from the pages. Nothing campy, no silly bat-skates. No quips like "Ice to see you". Just Batman bringing the absolute smackdown on a bunch of homeland terrorists. When the bad guys shoot down the hole in fear, that's when the tingle kicks in. They have no idea where he is, even though he more or less just came in through the front door. They're scared and he is the night. I feel like a kid watching the cartoon again. Except that cartoon is an episode of WWE RAW from the Attitude era. This scene allegedly took 7 months to film, and it was clearly worth it.

ESCAPING THE KYLN (GUARDIANS OF THE GALAXY 2014) 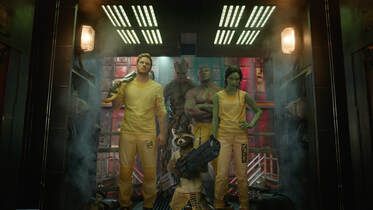 I remember how pumped I was to go see this film. I love space and sci-fi and I just KNEW this film would click with me. I didn't even watch any trailers, I just saw a photo of the Guardians and right there and then, I was in. And whilst it isn't long before you see the gang all on screen and knocking heads (incidentally their own) it isn't until you see their improv escape plan that you truly SEE them.

Their personalities ooze out of every action and line delivered. Their skills and abilities are on the sleeve of the scene for you to see. Gamora decides to go into full assassin mode, Drax comes out of retirement, Groot dons his battle armour, Quill makes Han Solo look as charming as Mr Bean and Rocket? When Rocket gets a gun and cackles my skin goes electric! He's like a coked up Scarface on an adrenaline drip!

Filled with humour, slick fight scenes and a great score. Escape with the Guardians!

Also this is indeed one shot. The show's lead switched placed with a stunt double for some of the fight, but it's a single shot, with no fakery and no cuts. It's amazing to watch, blends impressive fight choreography with a real dark humour. Well, I find off screen fights and microwaves flying into the faces of people running into a room.
What do you think? What comic book movie (maybe TV) moments give you a tingle down your spine? What would you like to see me list in a future part 2 here?