Most people think I'm a total MARVEL head, but I am really just a sucker for a good story. My hunger is never truly satisfied. Like 'NO-FACE' out of 'Spirited Away' forever wanting more and more, although I yearn for a good story, not food. Ever since I've known I've had my head in a book. As a child my speed reading made me a nightmare for teachers. Remember in class when you were all given the same book to read? 'The adventures of Biff, Chip and Kipper' to begin with I think, before moving on to higher levels of reading. I was often at least a book ahead. I thought nothing of it until 1 day in Year 4. I had finished the book mid-class and requested the next one. Mrs Ricebirchall stopped the whole class and tested me about it on the spot in front of everyone. When I answered each question correctly and proved I had indeed read, understood and taken in the words on those pages, her eyes lit up. She immediately turned to get me another book and as she did, I saw everyone was looking at me but not all with the same glee Mrs Ricebirchall had. I didn't understand the big deal, I just liked to read. It's that passion for reading which means I'll pick up anything and give it a chance. Not to say I'm not fussy or all forgiving, if I'm not impressed within the first chapter, I will more than likely put it down and move on. 'HUCK' is a 6 part series that I took a gamble on and it's this curiosity within me, his story arc and the connection I felt with 'HUCK' that was the reason I carried on picking up this IMAGE publication.

​'HUCK' is the story of a stocky, well built, gas attendant who is (possibly) mentally handicapped (it's never said out loud in the comic but it is hinted at many times). 'HUCK' is just a nice, young man who possibly has the biggest heart and the best grasp of ethics i've seen in a character. He thinks like a child but that's not a bad perspective. He doesn't see or play the politics, he only wants to separate 'right' from 'wrong', which is an outlook I could only wish that the world shared too. On top of that he has super-human abilities in the form of speed, strength and the ability to track and find ANYTHING if he's simply asked to find it. The best way I can put it is that he's like Forrest Gump meets Superman. This guy stole my heart from issue 1 with his boy-like charm and his wonderfully simplistic character and story is one you should all read and share.

In the first issue we are introduced to his powers, his current life and his background through a few simple panels. Nothing too much to water down this simple concept. He's just a sweet guy, with great powers, living in a quiet town and using them as such. His 'adventures' consist of him trying to complete as many good deeds as he can for the town, in a day. 'TAKE OUT THE TRASH FOR THE ENTIRE TOWN', 'FIND A LOST GOLD CHAIN' are just some of his day to day activities. It does show he is capable of more than this but it's explained that it's clearly best for him and the town if he keeps a low profile. That is until one day when a terrible event is broadcast worldwide and 'HUCK' decides to do the right thing. The next 5 issues then follow the repercussions of this. His introduction to the world, his realisation that he is indeed different to a lot of people, the doors this opens and shuts finally summating in some surprising events. One's that show that the real trophies and riches in life is love, happiness and goodwill.​ 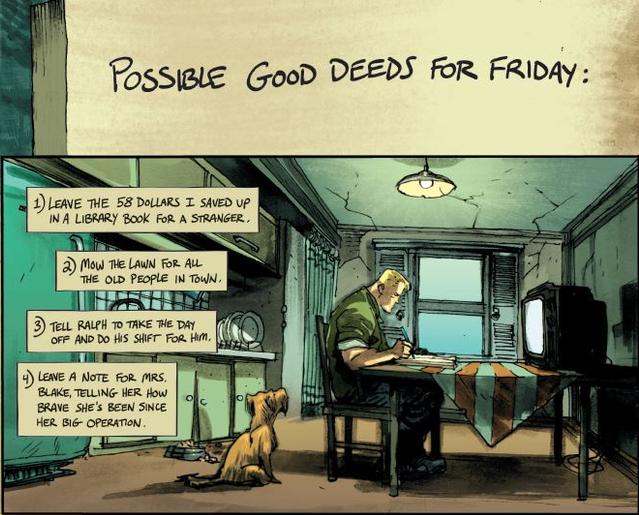 ​The reason I became more and more impressed with this comic is that it had so many sides to it. For starters the story is not predictable. It's ability to lull you into thinking "I know where this is going" before pulling the rug out from under your feet on the last few pages, was great. This isn't just an arc about someone untouched by the world being corrupted by it, far from it, this made me question my own cynicism. Why am I not as good a person as 'HUCK' and why is the world not how we all pictured it when we were 10? It kept me riveted the whole read and had me thinking about it long after I put it down. I also like the hints that 'HUCK' is (as they put it) "slow". This gave a different dynamic to a super-hero that I hadn't seen before. What if his motivation to do good doesn't stem from vengeance or because he feels that with great powers comes great responsibility? What if it's just because 'good' is what we should all be doing anyway? He stands out like a diamond in this world as all the other characters motivations for their parts in the story have a second layer of sinisterism to them. They all become much more dirty when you compare them to the pure boy that is 'HUCK'.

It's not too dialogue heavy either. Normally when telling these 6 issue stories, the rush to shove an entire world (and sometimes universe) into these issues can cause an over saturation on the pages and for some story to be lost betwixt it all. Each character speaks because they must. Even as the plots and events unfold I was amazed at even though there was plenty of twists and turns on his journey, Mark Millar didn't confuse me or lose me. This man has worked on stories as convoluted as 'Civil War' so I knew I was in good hands when picking this up. 'HUCK' has a lovely balance of artwork, symbolism and speech throughout it. Rafael Albuquerque's art is gorgeous to behold. Just like the story, it's not too epic and as detailed as Sara Pichelli but his watercolour style lines are great at really capturing the atmosphere and tone of the panel you're reading.

I don't want to talk too much about the characters as they will give away major spoilers but I can assure you, that the chemistry between all the parties involved is a real page turner. I understood each character's motivations and felt compelled to follow the story to the end to see where they all end up. The script made for some great moments in this comic. Moments of heart, wit and horror were all had and enjoyed by me. There is one particular line which made the hairs on the back of my neck stand up. I won't say what it was or who said it (again, spoilers) but it reminded me of that moment in 'The Incredibles' when DASH realises he can run on water. That same excitement ran through my body whilst reading this, something that happens far too rarely nowadays (probably my aforementioned cynicism). 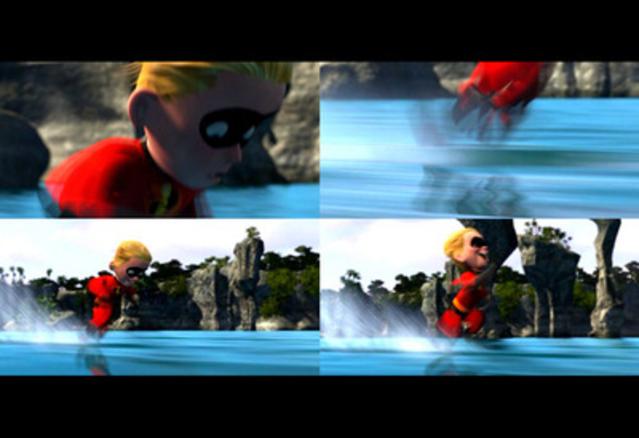 ​If I had one qualm with this run, it would be that it wrapped up a little too nicely. Not to say things shouldn't, however I do feel like some things were swept under the rug at the end. Almost quite literally how one character puts it to be fair. But I think I am being far too harsh on a comic that for all intents and purposes was just a flippant purchase.

I hadn't heard about anything beforehand and picked it up just because I wanted something to read. The little boy in year 4 who just wanted another book to read. But reading this made me remember that innocence and that first time you realise you're different to everyone else. Because that's not just a feeling I've had, we've all had it. After all we are all different and at one point or another in time we've had to deal with that first doubt in your head, 'what does this mean'?

This comic will take you all back to that moment and remind you that you were fearless. That you looked up and laughed as you ran on water and haven't cared since.