IRON FIST is the fourth in a series of shows created by Marvel, set in the current cinematic universe but with a much more adult spin than that of ANT-MAN or THOR. Each previous show has been a resounding success amongst the general public. Without having to believe in immortal superhuman war-heroes or giant green monsters, the shows ground themselves in real, street crime, underworld scenarios. Not to say our main characters are completely without powers. Jessica can sort of fly. Luke Cage has bulletproof skin etc Yet these are merely the background to what the story normally revolves around. A grasp for power between gangs in the belly of the New York or perhaps dealing with the trauma of a violent past. Regardless, these shows are often praised as being very forward thinking in how they mould the story of some lesser known comic book heroes. In short, for myself and others, IRON FIST had a bar of expectation that it needed to surpass.

Imagine my surprise when the first episode ended and all that I had taken away from it was how bland it was. This was the fourth of the four DEFENDERS solo series. So it had the most time to be worked on right? Actually that's an understatement. Consider that this was in development as a film since 2013 and then developed for TV since 2015, the creative team behind this have had more than enough time to get this to be more than just another origin/coming of age superhero story. Which it definitely needed to be.

If you were to generalise IRON FIST/Danny Rand's story, you could easily get the same concept as the TV show ARROW or even BATMAN. Wealthy boy loses parents, disappears abroad for years, comes back with unbelievable fighting skills and a lust for vengeance. In my mind, this was a series that needed to try a new and fresh take on its tale to differentiate it from the rest. And believe me, the material is there to do that.

For a bit of background, IRON FIST is quite an interesting story interlaced with martial arts and fantasy. Danny Rand is a boy from New York whose plane crashes whilst over Asia. He is found by monks who take him to a land that only appears on Earth every 10 years, Kun-Lun. Here he is trained by the monks in various fighting styles and martial arts. In his later years he is picked to carry the mantle of the IRON FIST. A moniker that makes him the ultimate warrior for Kun-Lun. In order to do this he must fight a FUCKING DRAGON!! Once he has plunged his fists into the molten heart of the dragon Shou-Lao the Undying, the dragon's superhuman energy is infused into Rand. This allows him to summon and focus his chi energy (also called natural energy or life-force energy) to enhance his natural abilities to extraordinary levels. His strength, speed, stamina, durability, agility, reflexes and senses can all be greatly intensified.
​
So what didn't I like about it?

EPISODES 1 + 2
These two men are responsible for two of the most boring Marvel Netflix episodes I have ever watched. There was little to no substance in script, characters, events and plot points in both.  I hated nearly everything about them. The camera angles were poorly chosen for some scenes with one particularly awful wirework stunt where Danny jumps over a car. Actually the first fight we see Danny get into is as well choreographed as a Southport Wrestling Federation match (you can see punches NOT connecting). There is no music or ambiance in multiple scenes where there is NOTHING happening on screen, so if there's nothing for the ears and nothing for the eyes...what is interesting here? For example, there was more tension and more at stake when Crocodile Dundee used a dead kangaroo to scare some poachers than in Danny breaking into a house and coming face to face with a guard dog. And my GOD how robotic everyone came off as. The dialogue could have been more entertaining if it was spoken in binary!

That could be from any scene in episodes 1 + 2. Granted there is a change in scenery in episode 2 but Danny repeats the same conversation several times each episode with little or no evidence to back up his claims, despite multiple requests and suggestions from people that just saying he's Danny Rand again and again and again, WON'T be enough.  In fact this didn't just occur in these episodes... 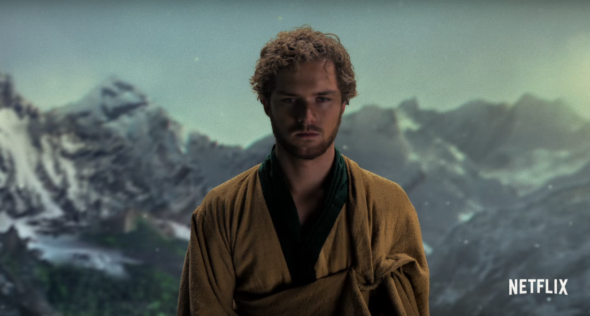 This is by no means an attack on the actor, I think a lot of this was to do with the direction he was given and the actual script he had to read from. Like I said above, the dialogue was particularly bland in the first 2 episodes, but there was nothing memorable about what anyone really said throughout most of this show. Danny is often just repeating himself, either explaining who he is, about the IRON FIST or how other people can not understand him and what he's been through BECAUSE he's the IRON FIST.  This gets repetitive, boring and for the viewer, very unfulfilling. I felt like I never REALLY knew how his powers worked or what he did to achieve them. It wasn't so much 'mysterious' more like 'evasive' of answering these questions. I am not going to say Finn can shake all responsibility here. I get that Danny Rand is meant to sound like he's been raised amongst monks but sometimes he didn't sound wise and/or calm. Sometimes he really sounded like Wahlberg in The Happening: 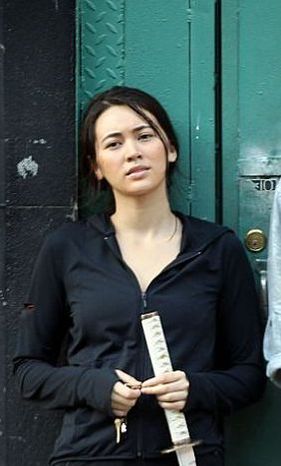 But it wasn't all bad. Jessica Henwick stole the show for me. She didn't have any problems delivering her lines like nearly every other actor. She was actually really great and I found myself more interested in who she was and what her character was about. Colleen Wing was no damsel in distress in this, no sir. Jessica Henwick had presence and conviction in every swing of her sword and in every punch, especially thanks to the focus put on her personal life.

The action and story did pick up after episode 3. I liked how Danny's past is slowly revealed piece by piece to both him and viewer alike. I liked how it was hard to know who to trust in the film. I liked Night Nurse showing up again and still having a place within this story. I liked the bad guys, more specifically I liked trying to figure out who is the bad guy and by episode 8, I was most definitely hooked and needed to see how it all ended. In fact I would like to praise all the antagonists in this series, I won't mention them as each one's appearance is a essentially a major plot point, I'll just say that they all definitely had some of the best scenes and made sure that this wasn't one big snooze fest.

The fighting gets a lot better and brutal (the lorry scene for example). There is an underlying sense of you don't know who is going to win or how events are going to unfold. Considering there is a lot of back and forth between the cast, it doesn't get too complicated. You always know what is going on episode by episode, never getting lost.

There were some great plot twists too! And some characters arcs were great to see out to the very end. But because of a very slow start it all felt like it took too long. To top it off, I was left slightly confused by the ending as well. For a series that should have focused on high energy action and mysticism intertwined with dark tragedy and fun "naive-kid-in-the-city-moments" we got a show that often pays more attention to board rooms, family infighting and a character failing every episode to find his place in the world with little to no progress, almost making his journey within some episodes, completely pointless.

It's not terrible, don't get me wrong but it is really problematic. Looking back on it I remember the bad more than the good and I don't think I would watch it a second time. In fact the more I think about it, the more I think about things like, "Why was there a Jack Sparrow ninja?" and "Why was the scene showing Danny's mum dying so fucking funny? Especially if you overdub it with Buzz Lightyear saying 'To infinity AND BEYOND'?"

I think he will make a great contribution to the DEFENDERS TV series but as for my rating on his own show? One hand is extending all its digits. The other is a fist.