Comic adaptations are happening more and more. Whether it be to the silver screen or direct to your television, Hollywood is finally appreciating the strange, fresh and original stories that get printed every month by various publishers. With the big 2 comic publishers majority of work being off limits (DC being owned by Warner Bros. and Marvel being Disney's best mate) it means that TV heads are having to head to other publishers for their ideas, which is fantastic. Why? Because a lot of these stories get overlooked by mainstream pop culture, it is bringing more attention to these publishers and writers.

The main question a lot of comic book fans will get asked is "Marvel or DC?" but that is often an unfair generalisation. It's fair to say a lot more comic book fans would find the question harder if the options were "Vertigo or Image"? Image you may know from AMC's The Walking Dead series, the 90's film SPAWN (please reboot this!) and most recently to TV, the show "Outcast". However, Vertigo have definitely had a jump in interest recently with 'Preacher' being commissioned for a second season (even though it's not even mid way through its first), the second season of 'Lucifer' is set to debut this september and 'iZombie' has had a third season greenlit for next year. Wait, what's 'iZombie'? 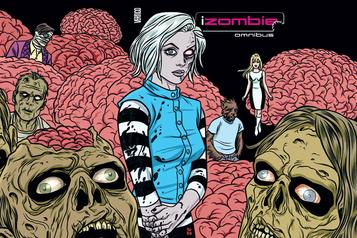 Now I have heard the name thrown about a bit. Unfortunately it is one of those names that doesn't do itself justice. Kind of like Karen Gillan's poorly named 'SELFIE' tv series. If you're like me, you hear names and words used like that and it just sounds like someone trying too hard. You can almost hear Craig in marketing saying "This is what's hot right now, this will be down with the kids". No Craig, it's not. You're kids don't like you and find you embarrassing, like hell you know what the youth of today want. If you can look past the odd title this is actually a great watch and I'm surprised it hasn't bitten and infected us all into its world.

'iZombie' tells the story of Olivia Moore who just so happens to be in the wrong place at the wrong time. The over-achieving, medical student is told by her perfect fianceé to attend a boat party to blow off some steam. Due to an unusual incident at the party she and the party-goers end up becoming zombies. Now bear with me here, this is where it gets a little weird. I mean we're not talking full on rotting flesh, stereotypical zombie. Yes, she craves brains and her body is undead but she's still a perfectly normal, functioning person only now she has this terrible, dangerous secret which steals away the life that she had and throws her into depression. She has to live with this secret. Alone for the rest of her life. That is until she meets her new colleague Ravi Chakrabarti. Her and Ravi work in the morgue where she gets to feed her craving for brains, eating the murdered victims that they work on. It turns out that Olivia picks up the traits and memories of the people she eats. When she starts having visions of the victims being killed and realises she can help find out who the murderers are, she rushes to the police and puts herself forward as a psychic consultant. The programme deals with her juggling this secret, her social life and her new found talent as a police detective and I've got to say, it works. 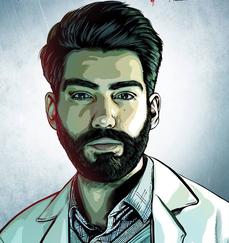 For me the reason this show works so well bottles down to one thing. The various characters that make up the cast of this show. They bounce off each other really well and bring an overall fun tone to the show, that's impressive considering it's about a woman battling depression, her inner demons, eating brains of the corpses she works on in the morgue and solving gruesome murders, which you see in all their graphic imagery. The banter is so natural sounding, nothing sounds forced as the actors deal with the odd situations unfolding around them. Ravi is one of the stand out characters in this. He brings a great amount of British sarcasm and wit to the whole scenario and lights up any scene with some well written gallows humour. He's not completely one dimensional either. His more dramatic scenes are great to watch as well, bringing a much more depth to a character that could easily have just been the witty sidekick.

​Another character I want to talk about is the main antagonist amongst all this would be chaos. Blaine. Blaine is without doubt the most likeable villain I have ever seen on screen. I love him. I mean it, I actually love this guy. Do I want him to win? No, because of the implications on the heroes of this story, he is evil after all. Yet at the same time, I want to see him succeed in one way or another. He's a smooth talking, calm, cool muso who exudes charm with splashes of humour. Will he put a bullet in your brain? Yes, but he'll do it with pizzazz, wit and the conviction needed to let you know he's the alpha. Add that on top of his business smarts and cocky demeanor and I think, honestly proof reading this back, I do think I have a crush on the guy.​ 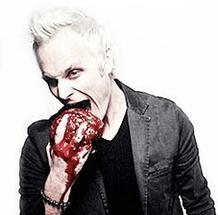 If brains be the food of love...
​If I had one small problem with this show it's Olivia Moore herself. Not the actress. Rose McIver does a fantastic job of playing a character whose identity changes slightly every episode. That's some Whose Line Is It Anyway? talent right there. "So this week, you're Olivia but she has an annoying optimistic complex, then the week after she's going to be addicted to sex". Rose does a fantastic job of doing exactly what is asked of her but then it leaves open the void to a glaring question; Who is Olivia Moore?​ 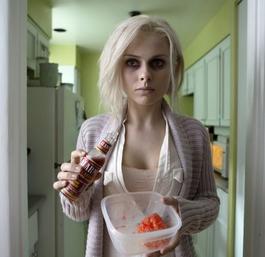 ​Her Ex-Fianceé Major even brings it up and you know what, I think the writers need to pull back on the "adopting character traits" part of Olivia. Some shows she has a mild amount of the murder victims personality to her. Other episodes, she is a completely different person. This can kind of go from being funny to annoying as it quickly takes the shine off of this part of the show. Kind of like season 8 of House MD when you and the show realise "Holy shit, it's the same premise every episode". To get that feeling that I know the skeleton of a show and how it works, only into its second season is worrying. But you know what? It's only the odd episode and the writing is fantastic in every other corner of the show.

It's not just the characters and dialogue that the writers do so well but the mysteries themselves are great. They lie somewhere between Scooby-Doo and a classic Sherlock Holmes murder mystery. The clues aren't clear, and Olivia's visions only show so much. The solution to the mystery has to rely on the great detective work and skill of Olivia and Clive (her partner) and to their due, watching all the twists and turns happen and seeing the mystery unfold is very entertaining. In fact the whole secret-zombie-life back story is very entertaining. Add to that the little things, like how every act starts off as a panel ripped from a comic with a zombie based pun at the bottom. The different ways she cooks and eats brains, making them look 'Insta-good'. How ridiculous her situation is and the show is so self aware of it. There's so much more as well including the relationship with her ex, her detective partner, how she became a zombie. There's a lot going on without it ever seeming convoluted. Well, apart from episode one.​ 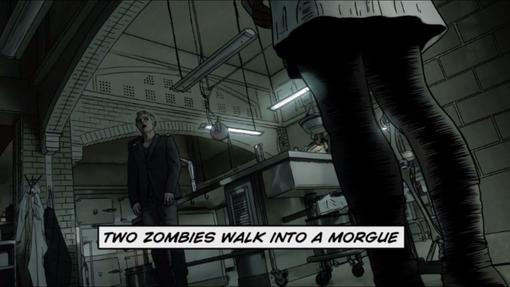 ​Episode one is where all this kicks off and I do think it's a bit much for one episode however, that's the deal you're dealt in Hollywood when you are given a pilot. I thought it was slightly exhausting getting my head around everything but then when episode two kicks in, I'm there. You have the bull by the horns, now run with it and that's when you can just sit back and watch it all go off, after all that's what this show is. One giant rollercoaster of events and emotions and you know what? It's bloody fun!

They could have gone a very different route and made this show about doom and gloom, and to an extent, it is. Olivia's life between murder mysteries is on par with being about as sad as Jessica Jones however, I didn't feel like killing myself at the end of every episode. I was gripped. I wanted to watch what happened next to see how she was going to jump this next hurdle that life was throwing at her. Not too dissimilar from the story arc of Vic Mackey in 'The Shield' (a fun, high-paced cop drama). Because let's face it, we've had enough of dark and gritty. We've had enough of feeling despondent and dead inside at the end of show. We want to be left laughing, crying or just plain feeling something move us. Why? Because it's fun. It's fun to feel. As you get older you get more cynical and harder to please. Some might even say they become dead inside. So when a show amuses me and has me bricking it about a character's story arc or has me gushing over the villain, I'm going to enjoy it. And that's the point of the show. Olivia is just trying to find meaning and amusement in her life after having everything taken away from her, and as I watch her climb this ladder rung by rung, I do too.​

So don't make the grave mistake of putting on the usual tosh! Stop dragging your feet and give iZombie a watch today. It's better than a bullet to the head.