​It feels like the wheels on this machine started long ago, however it may shock you to learn that this all started midway through 2015. I say that because it came as a shock to me. Daredevil burst onto our screens in one huge portion just over 2 years ago and since then we have been at Marvel's beck and call in our living room as well as in the cinema. And whilst DC has been building a mini TV universe since 2012 with Arrow, we were definitely all more excited and interested to learn about Marvel's TV universe as it was to be set within the world our favourite movies of the past few years had been set. And just like the feature length movies, Marvel couldn't stop hitting them out the park. Daredevil, Jessica Jones, Luke Cage...each of these had their own style, sound and identity. Then we got Iron Fist and...well, things got weird. 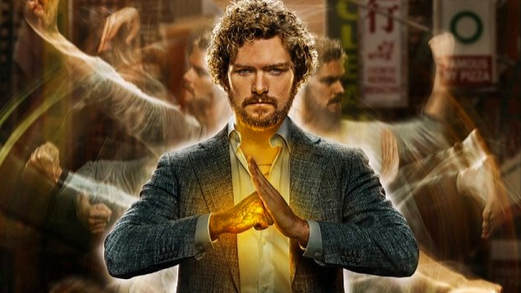 Iron Fist didn't really have it's own style and identity. In fact it really didn't have any identity at all. It was a very muddled series, with very little direction. It lacked the greatly executed fight scenes, the deeply layered characters and it was missing the cleverly written intertwining paths that the cast are bound in. I didn't hate it mind you. It was just very underwhelming and paled in comparison to its Netflix compadrés. Jessica Jones et al were KISS and Danny Rand was Peter Criss. Not everyone was so kind mind you, soon Iron Fist had somewhat muddied the waters that had been building up to the Defenders making its debut.

Yes, soon Danny Rand was not the hero but the villain of the Marvel's Netflix run and had tongues wagging. How much of a part was he going to play in the Defenders series? Would he be as annoying as he was in Iron Fist or could he ruin the entire Defenders season? Some critics have felt he did. Kelly Lawler of USA TODAY was more critical of the series, awarding it 2 out of 4 stars, feeling Rand was the "undeniable handicap" of the series, noting:

"One would hope that The Defenders would shy away from Danny and his petulance, but unfortunately, Iron Fist is integral to the larger plot. Every scene featuring him drags, and he is in too many to ignore, with clunkier dialogue than his fellows."

And it would be really easy for me to join her and the rest of the community who believe Danny was the chosen one, chosen to ruin this season and the Marvel/Netflix TV universe. And yet I can't help but feel we're all overlooking the greater problems and issues this series had. For starters, if there was one character from Iron Fist that was clunky with his dialogue and ruined every scene he was in, it was not Danny Rand but Bakuto.
Gao has been one of my favourite recurring characters throughout these shows. Her story arc has left me constantly wondering who she REALLY is. How powerful is she? What is she capable of? Whenever she's appeared on screen, I've been hand over mouth, murmuring "Oh, shit is about to go down!" to myself. So how disappointed was I to learn that in the Defenders she's a doormat! A spineless worm who cowers before the other members of the hand and tries to keep them all on the same side. This wasn't the woman I've been shown for the past 2 years. The woman who made Fisk tremble. The woman who happily blinds all who work for her in her heroin dens. I know there was some awesome fight scenes and she showed what powers she possesses by throwing her Chi about like Darth Vader in Rogue One. At the end of it though, it wasn't enough to stop me from seeing her as nothing but a coward hiding in the shadow of Sigourney Weaver. Another character who did 'what' exactly?

She was never a threat to the Defenders, she had no story to tell and her sole purpose was to be killed (again, a role Sowande could easily have fulfilled). A hand shouldn't have 5 fingers anyway, it has 4 and a thumb. She was the thumb and Gao was under her. These 3 were the majority of a criminal underbelly that were meant to be the Defenders great challenge and that somewhat took away from the gravitas of the situation. This became less like an evil empire that needed overthrowing and more like a bunch of old has-beens who are clutching helplessly onto power. That just did not work for me, I wanted a Court of Owls and not a court of jesters. Well it wasn't all bad, at least we finally saw our favourite characters team up and that was a blast right? Well...

I don't know about you, but I didn't really see any spark between them. The dialogue between these guys just wasn't as back and forth as I wanted it to be, I yearned to see bonds being forged and I didn't really feel we got that. A good example is Luke Cage. He often came off as preachy when speaking to the others and was never more than a babysitter for Danny Rand. A totally missed opportunity to have them bond over music and get a step closer to the 'Heroes for Hire'. I'm being a bit picky here as I found them all great on their own merits. Matt Murdoch was intimidating and brooding, Luke was cool as fuck, Jessica actually was amazing both on her own AND with the Defenders, running rings around them with her back chat and blunt lines, and you know what? Danny was good too. He was more upbeat, much more interested in them all teaming up, getting the cogs going and then, when he realised he could maintain his Iron Fist, he became cool too. No, Danny wasn't an issue at all for me. My biggest problem came when I realised we had seen this all before. 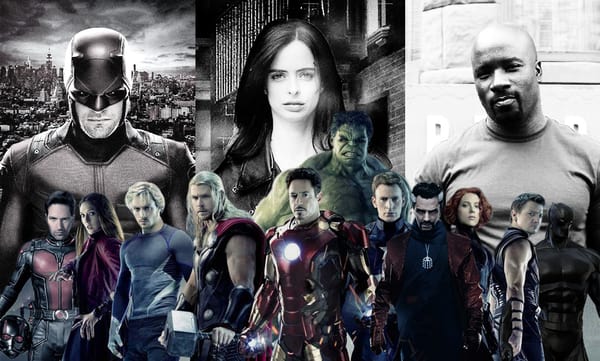 A team of super powered individuals who don't really want to be together? - Check
They get brought together by an agent who believes they can be something bigger than they are? - Check
The main villain hides in the background, a second villain leads a small army and does the hard work? - Check
Someone close to the heroes is brainwashed into working for the villains? - Check
Someone on the team still believes that said person can be brought back? - Check
The Villains are after a specific item/key to unlock something that may cause a large amount of destruction? - Check
The heroes get angry and struggle when they discover a secret kept from them? - Check
The older agent who hired them gets killed in a battle with the second villain? - Check
The destructive force comes from a massive beam/tunnel through a hole in the sky/ground, threatening New York? - Check
This takes place in a building which has links to the member of the team who is a millionaire? - Check
This is all resolved with a large controlled explosion? - Check
A member of the team sacrifices themselves to save the team and the city? - Check

I'm not saying I hated this mini-series. I actually really enjoyed it. Some scenes are incredibly memorable and some characters have been set up in such a way that I am genuinely intrigued where they're all now going. It was great to finally see them all together and I feel better now that the Hand and the Black Sky story have reached their third and final act. On the other 'hand' I didn't always like the editing, the music was a bit forgettable, episodes didn't always move along as well as they should and between the poor villains and the terrible graphics of the building collapsing, I couldn't help but see the mirror image of the Avengers within it.

With the Punisher, new Jessica Jones and the third season of Daredevil in our not so distant future I do ponder what the future holds for our Defenders. This was a shaky start, Marvel and Netflix are lucky that these characters are so strong we can look past the cracks and just enjoy finally seeing these guys together. It reminded me of that feeling you get when you finally get to see a band you have liked for a long time, finally play together. Even if they drop a note and even if the set isn't the tracks you envisaged, you're just happy to be there, in that moment and I think that's what I got from this. If you can look past what I've said and still enjoy it, you can look past Danny fuckin' Rand and enjoy it.