The trailer for mid90s really excited me. I was, like a lot of the youth in the 90's, drawn towards the skateboarding scene of America. Tony Hawk was king, skate punk ruled the airwaves, it was a beautiful time. For a lot of us though, we felt like outsiders just peering over the fence. We didn't have YouTube or Skype so we had to rely on tapes that made it over here, any TV coverage that MTV would put out, and Jackass! So to finally see a film set in and around that time, and so focused on one gang of kids who are deep in that scene, sounded like a great idea to me. But be warned this is a hard watch. Los Angeles wasn't as shiny and polished as Tony Hawk. It's dark and a bad influencer, like Tas and Ben Pappas.

From the first scene, we are forced to watch something extremely uncomfortable. This immediately sets the bar on what to expect from this film, and from Sunny Suljic who plays 13 year old Stevie. Everyone's acting in this is beyond incredible, I often forgot I was watching a film, but Sunny is on another level. I really felt like this was his life and we were seeing him experience all these things for the first time. No script, no cameras, just there observing. This film follows Stevie in 1990s-era Los Angeles who spends his summer navigating between his troubled home life and a group of new friends that he meets at a Motor Avenue skate shop. 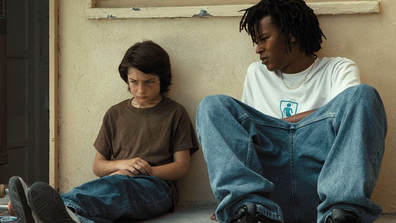 Jonah Hill transports us all so easily to this devil's paradise by using cameras and music from the 90's throughout. No sweeping wide shots to dissect on your 4K TV my friend. This is straight up a square, grainy film with 'Bad Brains' and 'A Tribe Called Quest' playing over it. I have often complained that I really don't like HD and think it makes movies look more like TV soap operas, and this supports what I say. It left me with an odd blend of feelings. There was something really nostalgic and epic about this whole film, but I didn't feel too far removed from it either.
All these characters are totally believeable. And that's a hard feat considering Jonah wrote a bunch of kids of different race and different ages. Characters like 'Fuckshit' and 'Fourth Grade' are extreme polar opposites, but with next to no back story we understand and believe that these two would hang out together. Because skateboarding did that, especially when it's all you have. I met some of my best friends through skateboarding, I skated on the sunset strip myself when I was Stevie's age, so maybe that's why I feel so close and akin to this story because I can believe any of the groups of kids I saw skating around me could have been going through this exact sort of thing.

If I had to say anything bad about it, as the story transpires it does follow an almost predictable trope. I don't put this down to lazy writing, I think it's fairly believeable that this is the road the 5 kids would have gone down, and maybe it did. I can't help but feel that 'Fourth Grade' is meant to be Jonah Hill himself and all this actually went down. If you're not a fan of skateboarding, bad luck, because it features quite a bit. Although Jonah Hill himself said,

But there is loads to love about Jonah Hill's first outing. The nostalgia is "super low-key" and really is subtle and tasteful, making this a perfect period piece. Trent Reznor and Atticus Ross perform a great sounding score over a lot of hard to watch scenes. Scenes that unfortunately may be too hard to watch for some people. Yet that is life. When you fall, you can fall hard, but you have to get back up. That's life and that's skateboarding. If you ever attempted an ollie, wore a pair of AIRWALK trainers or listened to 'Dude Ranch' in your baggy Soho jeans, this is for you.