MOON KNIGHT: FROM THE DEAD 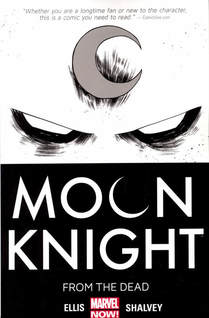 Marc Spector is one of those comic characters that I've always seen on 'most underrated heroes' lists. And it's always these three key points that are attributed to his 'Moon Knight' persona:

a) He's got mental disorders/personality disorders
b) He's a vessel for the Egyptian God of the moon, Konshu.
c) He's Marvel's 'Batman'.

After reading this book, I would say to all the writers who made these 'unappreciated heroes' lists (and I quote the great poet Marvin Lee Aday here when I say), "two out of three ain't bad".​
I'm going to address this immediately; this guy is no 'Batman'. But in a good way! It's like saying the wrestler 'Justin Credible' is no 'Kane'. He's not trying to be and doesn't need to be, he's got his own thing going on. Yes, his main objective is to scare criminals and fight crime at night, but the same could be said for 'Daredevil', and one could argue that 'Batman' has borrowed that idea from the 1930's run of pulp novel 'The Shadow'. And yes, he is a billionaire who uses his resources to fund his tech and weapons but so does Tony Stark, Oliver Queen, Adrian Veidt etc. The final nail in this loose simile for with my first hand experience reading this and from what I've read about 'Moon Knights' other books, is that these points are never focused on, given that the character has so much more about him for writers to work with. 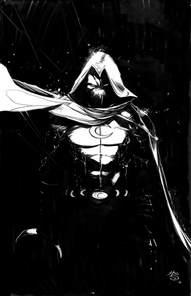 Now I could tell you about how Marc Spector came to be the avatar for Konshu. Or I could somewhat delve into how that affects his psyche and how his 'Dissociative Identity Disorder' makes him a somewhat dangerous and unpredictable player in the Marvel comic universe. I'd rather not though, as this is all brilliantly told in the first three pages of the comic without the use of flashbacks, just very clever exposition. By the time you are turning to the fourth page, Mark Spector hasn't uttered a word and his infamy has already hit your head like a strong shot of sambuca. What proceeds is six fantastically written, brilliantly drawn and well thought out, separate tales in the life of 'Moon Knight' upon his return to New York.

What I love most about this book was how unlike most of its Marvel neighbours it is. For one, Marc often deals with the dark underbelly of the city. There's no fighting mad titans or huge epic sky battles, he's down in the gut of the city. Specifically the part of the gut that churns out serial Killers and child abductors. This city is rife, but 'Moon Knight' is not interested in bringing them to justice and the law. Instead he wants to inflict fear and torment upon them before taking their last breath away.
These terrible and brutal tales are told beautifully and in such a manner, that each panel guides your hand and eyes to the next panel and page. I devoured this book with joy and yet, like any good book or show, it left me wanting for the next chapter. Ellis has danced in perfect tune with Shalvey to create incredible storytelling constructs that leave me wondering how else could they have told these tales. Ellis takes a simple idea like 'SNIPER' or 'SCARLET' and pushes the envelope to the next level.

Marc doesn't just have to deal with psychos, but with the paranormal too. 'Moon Knight' is no stranger to the occult (having an Egyptian God inhabit your body and mind will do that to you) and takes on some jobs that may be too inconsequential for a mighty Avenger like 'Doctor Strange' to take on, or maybe just too bloody and violent for the pages of his book. However, it wouldn't be remiss to see some of the artwork don the inside of a 'Doctor Strange' comic:
Shalvey does a fantastic job of conveying everything off of the page straight into your imagination. When I see 'Moon Knight' fighting, I don't see some panels of a fight. I see one flowing, fluid fight scene that is as well choreographed as anything from the 'Daredevil' TV show. I feel the dank, dark rooms enveloping around me and the descent into madness feels like it's just below my feet. I also appreciate how much emotion he can put into the face of a man whose head is covered in a white mask. Shalvey's panels are so critical to the storytelling that I, personally, would credit him to the writing of this comic as well.
As for negatives, I really didn't have any! I could see the disconnect between each short story perhaps ruffling some feathers. Abrupt endings without complete explanation are in the more 'other-worldly' tales, but then you are dealing with magic, mysticism and a protagonist who's possessed by a God of the Moon. Things are bound to be a bit weird, go with it. Also sometimes you don't know if what you just saw or read was merely in the character's head or actually happening. None of that bothered me though, a little bit of uncertainty and mystery is sometimes lacking in our "post-everything-online-open-book" world that we live in today. When I think about it, there is a lack of interaction with this character and the rest of the world but it really doesn't need it. This is fantastic at its bare bones, which is just a great, episodic, detective comic that revolves around a masked vigilante and his one man fight against crime in his city. But this isn't 'Batman'. This is 'Moon Knight'. And he's insane.