Star Trek: Picard had a tonne of anticipation surrounding its launch and it seems it hasn’t entirely lived up to the hype. Early trailers teased a retired Jean-Luc Picard tending his idyllic vineyard in France before being hastily called back into action, albeit not in his capacity as a highly decorated admiral. Due to this, we were made well aware that ST:P would not be a Starfleet-heavy affair, as the titular character would be executing his mission with a rag-tag much of misfits aboard a non-federation vessel. With this in mind, we headed into the show with expectations much different to those of Star Trek: Discovery, which debuted just 3 years earlier. This is to say, any fans of Star Trek: The Next Generation (the show where Patrick Stewart originally played the beloved Captain Picard) anticipating a similar tone to its parent show, would be sorely disappointed. Gone are the days of the, “adventure of the week” style of storytelling that the show’s history is built on (unless you’re watching Seth MacFarlane’s Star-Trek-in-all-but-name, “The Orville”). Due to the meteoric rise of streaming services, TV executives seem to have decided that everything works best as a serial drama and Picard is no exception.
The highlight of the show’s premier was almost definitely Brent Spiner reprising his role as Commander Data. The deceased android appears to Picard in a number of recurring dreams, supplying his former Captain with certain prompts needed to propel the plot. It’s rather clumsily executed, but easily forgiven given the amount of adoration for the character. Picard follows Data’s breadcrumbs which eventually lead him to reveal the existence of 2 synthetic lifeforms; twins known as Dahj and Soji, both portrayed by Isa Briones. Picard’s digging also unearths the fact that the synths are also Data’s, “daughters” with their consciousness having been constructed from the remaining positronic neurons from the artificial brain of their, “father”.

The plotline’s catalyst rears its head when Dahj, who seeks out Picard in fear for her life, is hunted down and executed by the Tal Shiar. When it is discovered that Dahj was actually a twin, Picard feels compelled to approach Starfleet to request a ship and crew to rush to Soji’s aid. The request is vehemently denied and robs the audience of any hope of seeing our hero return to the captain’s chair. Whilst it clearly would have gone against the writers’ concept for the story, this is just one example of ST:P’s tendency to take a wide berth from what perhaps die-hard Star Trek fans wanted to see revisited on-screen. 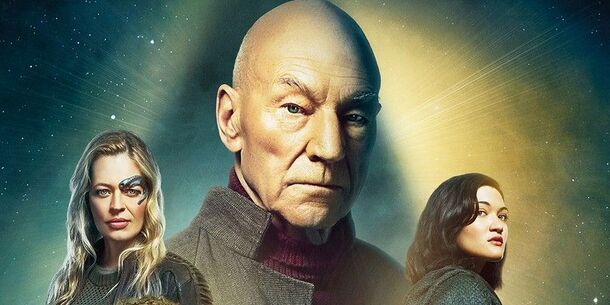 Not wanting his old friend’s remaining daughter to also fall to the Tal Shiar, he assembles his own patchwork crew consisting of synth expert, Dr Agnes Jurati (Alison Pill), Romulan warrior, Elnor (Evan Evagora) and fellow former Starfleet Officers, Raffi Musiker (Michelle Hurd) and Captain Rios (Santiago Cabrera). Whilst most of the crew have their own merits, Elnor comes across as an irritatingly immature token Romulan with very little depth. Whilst his history with Picard is addressed via flashback scenes set just after the destruction of the Romulan home world, he still remains a very difficult character to relate to or admire. Raffi’s history with Picard is also installed with flashbacks, however it’s executed in a much more believable fashion. Whilst her constant use of her nickname for him “JL” does eventually grow to be quite endearing, the use of alcoholism to portray her tortured soul is a trope that is far too overused in recent storytelling. Whilst Pill’s portrayal of Dr Jurati was not without its highlights, of Picard’s new crew the most complete performance comes from Cabrera as La Sirena’s captain, Rios. His tearaway, cavalier, mercenary-like attitude to space travel is just what we needed to see, if we were to be denied seeing the inside of another Starfleet vessel.

Main cast aside, ST:P is littered with cameos and guest appearances from many aspects of the Star Trek universe. Johnathon Frakes returns to the director’s chair as he has with many of Star Trek’s properties, as well as reprising his role of Commander William Riker, Picard’s former first officer for the duration of ST:TNG. Frakes doesn’t miss a beat as he brilliantly steps back into the shoes of the charismatic commander, arguably giving a better performance than Stewart himself. We even get to briefly see him as acting captain of his own ship, a fantastic piece of fan service.

Marina Sirtis also makes a return as Counsellor Troi, just as consistently as her on-screen husband. For us to witness that they have a daughter, and have also since lost a son, adds instant levels of history and emotion to the characters that we haven’t seen for so many years.

Whilst Jonathon Del Arco admirably returns as Hugh, a former Borg from ST:TNG episode, “I, Borg”, a much more recognisable liberated drone makes an appearance; Jeri Ryan as Seven of Nine! The former USS Voyager crewmember is shown to have adapted to life back in the alpha quadrant, and Ryan’s portrayal of the character has adapted accordingly and in fantastic fashion. Her delivery of dialogue is much less like that of an automaton and her overall mannerisms have developed their own flair after being away from the Borg collective for so long. Whilst we see her briefly become an ad-hoc Borg queen aboard the artifact, we also rather disappointingly see her separate herself from the collective with great ease, missing out on what could have been a much more fruitful moment. On the other hand, the witnessing of her failed attempt to rescue Icheb (another former drone from Voyager to whom she acted as a mother figure) from being dissected alive for his Borg components was a truly heart-wrenching moment.

Seven is not the only element borrowed from Voyager, however. Aboard La Sirena, we see the ship has an Emergency Medical Hologram installed. The concept of the EMH was one introduced on Star Trek: Voyager, with Robert Picardo playing the holographic doctor. Whilst ST:P has built on the idea with having emergency holograms available to run almost every area of the ship, it’s excellent to see the writers drawing on inspiration from even a sometimes forgotten about Star Trek series.


Despite the vast array of faces both old and new, it’s difficult to identify a true villain in Star Trek: Picard. Whilst the Romulans were an odd choice to place front and centre as the antagonists, they also have had relatively little screen time compared to other races in the Star Trek universe. However, as the show progresses, it becomes more evident that they are not as villainous as first suggested. Whilst we don’t actually know until the finale that 'The Admonition' was in fact accurate, they do seem to be genuinely saving the universe from organic extinction by hunting down Soji. This realisation could lead to the assumption that the Tal Shiar operating from an abandoned Borg cube known as, “the artifact” is merely an attempt to make the Romulans more menacing by combining them with unnerving Borg imagery. It’s only when it’s revealed that the cube was severed from the collective, due to the sheer terror of a Romulan who had witnessed 'The Admonition' was assimilated by the Borg, that we realised its purpose is to demonstrate the power of the prophecy in question.

After Picard has retrieved Soji, who was working aboard the artifact, and revealed to her that she is not actually organic as she had believed, the crew make their way to the synthetic’s “home world” or at least where they were constructed. Here we come across an entire population of synths, one of which appears to be an earlier version of Dahj and Soji, given the non-human hue of her skin, more similar to that of Data.

When they reach the planet, the plot seems to make a rush to the finish line. After what feels like a very brief debate on the priorities of organic and synthetic life, Soji very quickly turns on Picard and the rest of the crew of La Sirena and assists the other synths in constructing a beacon which would fulfil 'The Admonition'. A brief space battle ensues between a fleet of Romulan ships, who have followed La Sirena to the planet, and Picard with Dr Jurati in a single ship, in an attempt to buy time for Starfleet to arrive. They are also assisted by ship-attacking, gigantic space orchids which are never acknowledged and are quite honestly, ridiculous.

Picard’s gesture to attempt to protect them from the Romulans is enough to convince Soji to stand down the beacon, just in time for a fleet of federation ships to arrive, warding off the Romulans. The admiral is then finally defeated by a brain abnormality which has been increasing in severity since the series finale of ST:TNG and he passes away aboard La Sirena.

However, in very cowardly fashion, he didn’t really die. Picard’s consciousness had been mapped and stored in a matrix on the synth home world. Whilst this kind of fake-out death seems to becoming more and more common, especially in science-fiction writing, it seems to always result in an internal (and sometimes external) groan. Misleading death scene notwithstanding, it does allow Picard to converse with another consciousness being stored in the Matrix, Commander Data. The heartfelt conversation between the two is without a doubt the emotional crescendo of the show, as the two friends get a chance to say a real farewell, after missing out on the opportunity just before Data’s sacrifice to save his Captain in Star Trek: Insurrection. 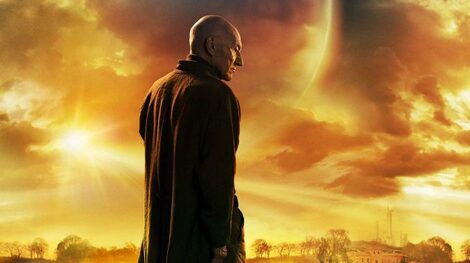 After agreeing to Data’s saddening request to delete his programme once he is extracted, Picard’s mind is transferred into a synthetic body, conveniently altered to look exactly like his previous organic body. Whilst Picard’s brain abnormality was finally addressed, the choice to have his organic form perish as a result and transfer him into a synthetic body is a bold one at best for such a beloved character. The season ends with Picard back aboard La Sirena with his crew, synth ban lifted and hinting towards a second season.

Overall, Star Trek: Picard was fine. It didn’t stray too far from established lore, it advanced previously mentioned technology to an accurate level and had enough old faces present to keep the interest of veteran Star Trek fans.

However, the new characters introduced were far too two-dimensional, with Captain Rios just about being the exception. The choice to lay a path before Picard that didn’t include Starfleet was a brave move, but it did not pay off. Star Trek has always been about Starfleet and the Federation, and straying from this convention showed promise at first but very quickly lost direction with no established framework to prop it up.

The story on paper even sounds great, but it did not quite live up to what it could have been. Whilst I would welcome a second season, if it doesn’t feature Jean Luc Picard, Active Starfleet Admiral, the show runs the risk of hitting the same obstacles.