This comic has been a real head scratcher. I'm sat here trying to figure out how to review this, I don't even know if I liked it or not to be honest. Hopefully by the end of this review I'll have figured that out for you.

So this is a comic based on everyone's favourite raccoon and tree combination from the hit film/comic series 'Guardians of the Galaxy'. When this movie came out in 2014 I don't think anyone expected it to work as well as it did. A major factor in its success was from these characters called Groot and Rocket and the chemistry between them.

In case you need me to help you play catch up here, Groot is a tall, tree-like extra-terrestrial who is limited to saying "I AM GROOT". He packs a punch, acts as Rocket's conscience and seems to be mostly invulnerable seeing as he can grow and form from any part of himself that is still intact. Rocket is a raccoon that has been genetically modified to have high intelligence, great skills in combat and weaponry. He also has a bit of an attitude, a problem with authority and issues differentiating between what is right and wrong. This means he is a bit of a talker, which compliments Groots lack of speech very well. Like Jay and Silent Bob but no weed. Oh and the both of them travel through space (and sometimes time) together with a group of misfits called 'The Guardians of the Galaxy'. When you word it like that, why was I really surprised by how weird this comic was?

​I suppose you have to define what I mean by 'weird'. Have you read 'The Wicked and the Divine'? In comics nothing seems off limits, so is it actually fair to call this run 'weird' given some of the stuff I've seen and read? Actually, yes. But not because it's a story about a Raccoon and Tree traversing through space. Both of these guys have recently had solo runs which were quirky and very entertaining to read. Groots was a Disney-like adventure of his mission to get to Earth, rescue his friend, whilst meeting a bunch of characters along the way and getting over the barrier of communicating to other life forms, even though his entire lexicon is just 3 words of introduction. Rocket's run was a bit more sinister in the sense that he was framed for murder. We follow him trying to solve the mystery whilst avoiding being captured. Whilst these were great runs, people were wondering; when are we going to see them share a title?

January 2016, a new year and finally we get our favourite duo back together in one comic. What happened next though was very odd. They weren't in it. 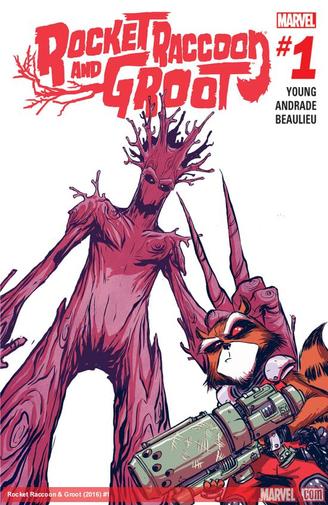 On the cover but not in the book itself...much anyway.
​Instead we got 'Pocket' and 'Shrub'. Characters created to carry the joke that is the play on our heroes names. Luckily they don't go too far or wear the joke thin, instead they use it to help us deal with the fact Rocket and Groot are dead. I'm not spoiling anything. It's literally page 1, panel 1. They're dead Jim. Imagine my confusion at reading this, the 2 reasons I have bought this comic are dead and not in the comic. This confusion carried on with the other revelations that unfold at the end of issue 1, carry on through issue 2 and then throughout this story .​​ 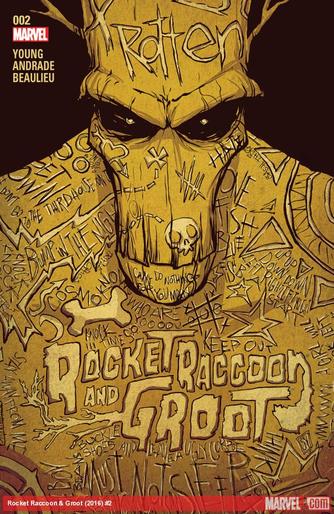 I felt confused and totally weirded out at the storyline, more so than I have in a long time. It was like something out of fan fiction. It was like 'Prison Break' with the tongue in cheek tone of 'Face Off'. However, though this confusion I found that I wasn't so much scratching my head, but stretching my imagination. I guess I did like this, it was different. It had mystery as I genuinely didn't know where it was going to go nor did I really know where we had been to get here. It had still had that family-friendly (slightly gallows) humour. It had great artwork too, I'm very picky how artists depict Rocket and Groot. Sometimes Rocket looks like a Yorkshire Terrier and Groot looks like a black metal band's logo. Andrade and Young do fantastic jobs here bringing both characters to life, hell they bring Pocket and Shrub to life too.
​The final third issue of this storyline sees a major plot twist. Like something out of Sixth Sense but as silly as something from the aforementioned Jay and Silent Bob. I liked this because the storyline does indeed take you down the rabbit hole. When doing something as adventurous as this, creatively as a writer, you're facing 3 options. Commit, cop out or plot twist. Young makes the right choice and we get our resolution and a much greater insight into the dynamics of how Rocket and Groot work, not only as a team but as friends.

​So I guess looking back on it, I really did like it. I remember the story vividly and it makes me chuckle. I would actually read it again to see if there's anything I missed now knowing what I know (the plot twist is good). I'm definitely going to be picking this issue up as it careens into the next story. If it can keep up this unpredictable way of writing and unusual, Mighty-Boosh-like storylines then this really should be something that you should all pick up. It fits very well into Marvel's 'ALL NEW - ALL DIFFERENT' brand and shows that they are willing to push the envelope just as much as the Indies.  As I write this Issue 4 has come out and the synopsis is Rocket and Groot are recruited as replacements in an intergalactic football league. Something tells me that it's not going to be as simple as that...