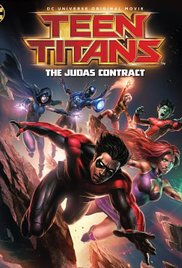 Immediately I have to admit, I've never read any Teen Titans. I've never watched any of the TV show and my knowledge of the characters is quite thin. When I saw this on offer though, I thought that this might be a great way to get to know them. A gateway into their world and maybe an avenue I can go down further with my ever growing trade paperback collection.  I imagine that Sam Liu, the director, will be displeased to hear that this barely inspired me to write this review, let alone get me excited about the Teen Titans.

I am a bit fussy when it comes to my heroes. I tend to enjoy reading about female superheroes more than their male counterparts. Ms Marvel, Batgirl, Shå from 'The Spire' etc. I do also enjoy anything set in the Gotham-verse as it were. Batman, his motley crew and his rogues gallery? I can read about them all day. So with Nightwing being a main character this should have had me riveted right off the 'bat'. Add to that you have Raven, Terra and Starfire representing the girl power and, on paper, this should be just what I need to get me started on a Teen Titans binge. Why was this such a flop for me?

Well straight away the voice actors in this feature length adventure had about as much life in them as a battered and limp passenger being dragged off of United Airlines. When the sombre Damian Wayne has more song in his heart than most of the cast, you really need to think about who you're hiring in the recording studio. In fact it's easier for me to list who DIDN'T make a toss up of their screen time.

Beast Boy and Blue Beetle were very interesting as they seemed to be both young, vibrant lads who have almost opposite views on their powers and abilities. Blue Beetle is constantly trying to control his powers and struggles to cope with the monkey on his back (almost literally) whilst he deals with the cards it has dealt him in regards to family and friends. Meanwhile, Beast Boy full on embellishes his gifts, finding any excuse to turn into any animal at any given moment. If there had been a room full of shit, he would have turned into a pig and rolled in it. These two definitely had me engrossed with their passions and drives and I was very happy for the screen time the duo were given as it definitely gave the film a kick it so badly needed throughout its runtime.

Another real problem this film had was the dialogue. Now I don't know whether it was to do with how it was delivered or these lines looked better on paper in speech bubbles than said out loud but there were some moments that just threw me out of the film.  I mean I will watch a girl control rocks and earth and throw them across the room whilst a bright green boy turns into an elephant, I really will. But I find it hard to believe that when Nightwing and Starfire are fighting off criminals in a hallway, it would come to his mind to proposition that they should start living in a flat together and that the best way to do this is to say in a monotone voice, "I've been thinking about it and I believe we should take our relationship to the next level." I mean what fucking guy would say it like that? How did he originally ask her out? See if she wanted to "Go steady"? This is meant to be the Teen Titans not Saved by the Bell.

​At the heart of it all, our main issue is that the story seems to struggle to focus the viewer on what we should be paying attention to. In short, without spoiling anything, Deathstroke wants to harvest the Teen Titans for an employer and his cult. In order to aid his ambitious mission he has managed to manipulate a mole into the gang. Will the Titans figure it out in time? Will our mole stick to the mission or will they succumb to the guilt of being a double agent? Simple, right? Then why do we get some unnecessary introduction to Starfire that has nothing to do with the plot that follows? I mean we're just shown Beast Boy and Blue Beetle and told to roll with it, Starfire could have followed suit. Why do we not get a clear main character until one third into the film? I had no idea who I was meant to be paying the most attention to. And when most of the cast are as interesting as a window, I begin to lose focus. You know who could have done with a greater focus? The cult.

Seriously, I can't remember anyone's name out of it, I can't remember what their plan was exactly and how they'd come to exist without anyone like Batman knowing about them. Thankfully Deathstroke was a great villain and I thought his manipulation and tactics were downright despicable, which is what you want in bad guy. He was so evil throughout this whole film that it made my skin crawl. Extremely memorable moments that you want to forget on top of some great voicework made this Deathstroke one of my favourite on screen villains that I have seen in a long time.

It's difficult for me to go on anymore really. For example I could say that Damian Wayne was brilliant to watch and a badass, on the other hand I feel like pointing out that Raven seemed kind of pointless and void of character. All I got from her is that she's moody. Damian is moody but he also has a personality. The animation was fine. Just...fine. There wasn't much expression in the characters faces but then there wasn't much in their voices either. This, plus a lack lustre Starfire and Nightwing, just amounted to a very average story being told with the same passion and ferocity as you get in a Year 3 Nativity Scene. Funnily enough the characters I had the least interest in (Beast Boy and Blue Beetle) ended up being the ones I walked away from this remembering. If you like DC and are already a big Teen Titans fan, I imagine this will suffice. If you are not as familiar with these characters, it might be worth you watching something else.