THE DEATH OF SUPERMAN

Hint: The clue is in the title of the book! This story is over 20 years old, so it's nothing new. But at the time, this was a HUGE DC storyline for obvious reasons. Their flagship hero, the original and most famous superhero in the world...The Man Of Steel, The Beacon Of Hope...Dead! And people were losing their shit over it!

We now live in a day and age now where our superheroes die and come back again within a matter of weeks, it's not a big deal anymore. But in the early 90's this was a huge deal and the gravitas of this book can still be felt when reading it today. Even though we know what's coming, even though we know how this is going to end, this is about the journey we go on to get to that conclusion. It is nothing less than a fantastically gripping read. This storyline kind of came out of the blue, during a period where DC was putting out a new Superman book on a weekly basis in the form of Action Comics, Superman, The Adventures Of Superman, and Man Of Steel. They showcased storylines that ran over the course of a month over the four titles, with each story self contained with a neat little ending and nothing that seemed to matter in the grand scheme of things. Then along came this absolute behemoth of a story. Superman's tragic battle with the formidable and frankly terrifying Doomsday.
Granted this isn't the strongest line up we've seen on the JLA, but it's still full of powerful heroes and even they can't stop Doomsday. To be honest, they don't even make him flinch! The violence that ensues here is brutal and pure evil. They get their asses handed to them! It's like a car crash, it's painful to watch. Blue Beetle gets put in a fucking coma, Ice gets thrown through a window, Everyone's favourite loud-mouth, smart-ass,  tough-guy, Green Lantern (Guy Gardner) gets seven shades of shite knocked out of him before he even gets to touch Doomsday. He gets so beaten up that his eyes swell up and he can't even see, yet he still carries on fighting which is pretty fucking baller. In one of the most brutal scenes in the book (see below) Doomsday goes all Wilson Fisk on us and smashes Booster Gold's head in a fucking car door! I literally gasped out loud in horror at this moment. The poor dude. I know a lot of Booster Gold haters out there that would actually relish in this moment, you sick fucks!
This guy has literally no soul or humanity inside of him. This creature is the living embodiment of rage. This guy has literally no soul or humanity inside of him. This creature is the living embodiment of rage. Pure evil.                   All he cares about is killing, he's a relentless monster. He doesn't talk. He can't be reasoned with. he doesn't have a plan for world domination. He doesn't want anything. All he wants to do is kill and destroy. He is Frankenstein's monster meets The Hulk. He is your worst nightmare.

The artwork is brilliant. Bold, colourful, and dynamic, they're not afraid of full page splashes and huge panels, which I absolutely love love love! There's plenty of big dramatic poster worthy moments on offer here. All them 'super' poses and awesome action aesthetics. There is a very strong 90's vibe throughout this book with both the writing and the artwork. However, that is actually partly one of the reasons why I love it so much. It's pure nostalgia. This is how comics looked and read when I was growing up reading them. This was my golden age. Saying that, it's no one trick pony for nostalgia's sake. This is a genuinely awesome book that still holds up to this day.

​It tackles social and political issues at the time via the storytelling within the Man Of Steel. The pacing of this book is fantastic. Considering it was written by multiple writers on a week by week basis, you don't even notice. The work by the different artists reflect perfectly the varying action and themes in each separate issue. The expressions and emotions drawn by the artists here are some of my favourite examples of that. Ever. Each act of the story suits each writer and artist. This is mirrored in the dialogue and panelling, the emotion, which is displayed and executed perfectly throughout. This is definitely one that tugs on the heartstrings. You hang on Lois and Superman's every word. Not only does this deliver with the action, it delivers with the dialogue too. This is something that's hard to come by in comic book stories of this type. The composition on the final pages is beautiful. The artwork is gut-wrenching yet beautiful. You actually feel like you're there in the thick of it. Experiencing the wailing sirens, the rumbling impacts of destruction, and hearing the panic stricken cries for help through the smoky atmosphere.

I absolutely love the full page splashes on the last few pages in this book. The placing of the text is perfect, and gets you right in the feels. The ending is drawn out perfectly. It leaves you with the saddest most satisfying conclusion you never wanted. This is one of the best Superman books of all time and one of my favourites. If you're a Superman fan, you need this book in your collection. If you're not, it's still worth checking out. Who knows, this might be the story that converts you into a Superman fan! In my opinion the story is executed perfectly and it's nothing less than a graphic novel superhero masterpiece. This is how you execute a big event story. This is how you pull off the death of a huge character. This is how superhero books should be done. 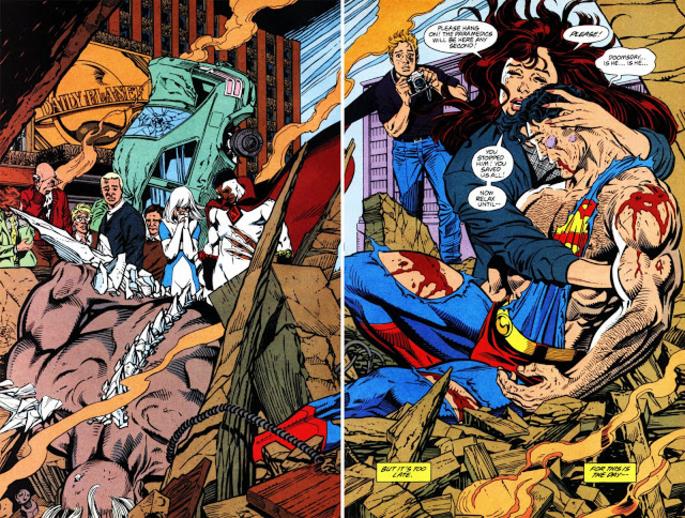