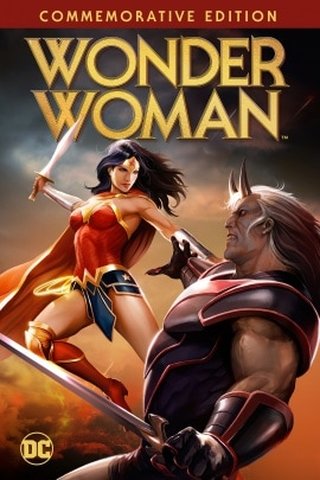 DC do actually have a large monopoly over Marvel. They have a larger, more consistent TV universe, they have better villains and they have a better animated library than Marvel too. Yes, recently hasn't been too great (I didn't like TEEN TITANS and demographically, THE KILLING JOKE wasn't exactly heralded as a "classic") but a couple of minor blips is all well and good when your back catalogue is filled with works of brilliance like this.

WONDER WOMAN (2009) is one of the greatest adaptations from page to screen since BATMAN: THE ANIMATED SERIES. This is due to sticking so well to the solid 75 year old source material, whilst also breathing a new surge of life into the story that blows away any possible cobwebs from such a well versed, modern legend.
WONDER WOMAN tells the story of Diana. An Amazonian woman forged from clay by the great Greek Gods to live on an island with her Amazonian sisters. A tribe who live in secrecy after a centuries long war with the God of War himself, Ares, ends with them triumphant and guarding his prison away from man. This all gets disturbed when a young pilot of the modern age, crashes onto the island and has to be taken back to the mainland.

From the very beginning of this epic tale, we are thrust into an ancient battle whose scenes are as disturbing as most war films yet dripping with the same subtle bloodstains that Hitchcock would use in PSYCHO. In fact this opening scene sets a great tone for the film as you see how far the film is willing to go to show the severity of war without playing the easy card of blood and guts. This in no way talks down to the viewer, takes away from the scene, nor indeed, the film. The battle we are introduced to between Hippolyta and Ares throws you right into the action, let's you get to know the seismic cast that WONDER WOMAN has to share the screen with and does a great job of getting you on board with what is to come...and guess what? Diana hasn't even been born yet!

Diana herself is a delight. Totally likeable. Keri Russell (The Americans) nails this intelligent, curious, sheltered warrior perfectly. I'm a fussy bastard when it comes to my voice actors. I can hear if someone is reading from a page or reading from the heart. Keri and the entire cast read like they are on center stage at the Colosseum on Saturday Night. But you really believe every word that comes out of Diana's mouth is Diana. From her primal screams in battle to her inquisitive conversations with a 7 year old girl. They also avoid the greatest danger with WONDER WOMAN and don't in any way to visually 'sex her up'.

WONDER WOMAN does a fantastic job of making the character of Diana beautiful and sultry without succumbing to the laziness of using less cloth on her suit. A sharp mind and a strong fist make Diana one to watch throughout this whenever she is on screen.

In fact kudos to the cast and writers for making this film a joy to watch. I loved every moment of every character on screen, which is saying something. I'm a 30 year old guy who genuinely enjoyed the interaction, discussion and character arcs of several strong, medieval speaking, female characters and their ancient greek like lives. Not to take anything away from the men in this. Ares is a definitely more formidable than 99% of the MCU villains and even the short time on screen that HADES gets, somewhat channels a James Woods/Disney-esque HADES that I can totally love for all the wrong reasons. There's actually a lot of sub-plots going on (like a Greek play) but it works and instead of diluting an already entertaining story, only goes on to thicken the tale you're watching.

The animation is ridiculous as well. The battles are so well choreographed and shot they wipe the floor with 50% of the action films I have ever seen in my life. It doesn't look cheap or in fact "animated". This film has done an amazing amount with such a small budget that it puts some blockbuster animated films to shame. There will be moments in this masterpiece where you marvel at why this looks better than some live-action films. WONDER WOMAN looks amazing. The life and soul of the comics is truly captured by the studio in giving us a strong and stunning Diana. The monsters look treacherous and haunting enough to give some kids nightmares. Ares looks like evil incarnate throughout, however I was disappointed we never got to see him in his classic blue armour.

So what didn't I like? Well, Steve Trevor (and men in general) don't come off great in the first two thirds of this film and I don't feel too biased here when I say that it's mostly because; Steve is a douchebag. The first man to land on the island of Amazonian women in a millennia is about as good a diplomat as Borat. His first line on screen is a sphincter joke before shortly following it up with a come on line to a brand new co-worker. He then makes pervy, creepy lines of dialogue to Diana, tries to smell her and get her drunk. The guy comes across as truly unlikeable. To both genders. There is no reason for Diana to tie herself to this man and his acts of stupidity and terrible one liners  continues near enough until the end of the second act. It's only then he completely changes, becomes heroic and even has a great, simple speech on why the Amazonian women's view on men is primitive. This doesn't redeem the character, it just makes me wonder (no pun included) where his head was in the first hour of this film. They end up trying to make him seem like a Peter Quill/Han Solo character but the damage is done by his actions in the first two thirds of the movie. A mark well and truly missed for me that just left a bad taste in the mouth.

Also, if I had to criticize anything else, I would say that whilst a great amount entertainment is derived from the sub-plots and characters, Diana kind of gets lost in it during the final battle. Yes, it's still a great watch (with heart-wrenching moments) but shouldn't the final battle with WONDER WOMAN et al kinda focus around WONDER WOMAN? Imagine the final act of POTC3 with little to no Jack Sparrow. Not boring but what's the point? And to go back to Steve Trevor again, the more I think about it, he does make jokes that will make your 10 year old ask uncomfortable questions...

Regardless of that, this was a highly enjoyable, action packed animation that really should hit home with genders regardless of age (although you might want to watch it before showing it to a 7 year old). It's totally re-watchable, it's totally likeable and it stands as high, if not taller, than Batman, Superman or any other superhero animation. A lot like Diana herself. Go watch this now!